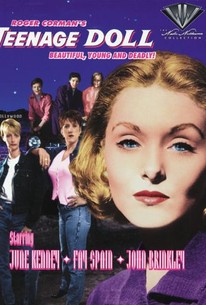 The Teenage Doll in this Roger Corman-directed "J. D." opus is a little number named Barbara (June Kenney). Basically a good girl, she falls into bad company when she impulsively decides to rebel against her parents. It isn't long before Barbara accidentally kills her tough-babe romantic rival (Barboura Morris), whereupon she is pursued all over town by femme gang leader Hel (Fay Spain) and her henchgirls (Barbara Wilson, Ziva Rodann). Barbara runs to her punk boy friend Eddie (John Brinkley) for protection, setting the stage for a climactic rumble. And remembers, kids: This could happen to you, so keep your record clean and stay home nights!

Colette Jackson
as May

The only thing enjoyable about this dumb 1950s juvenile delinquent exploitation film was in how it was so crass.

This is a fun Corman film, it's about juvenile delinquents, a girl gang to be specific. This movie is both realistic and at the same time exploitative. It's really interesting, and one of my favourite Corman movies.