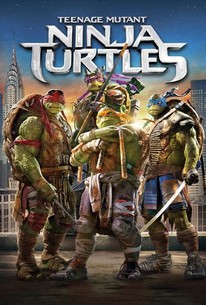 Critics Consensus: Neither entertaining enough to recommend nor remarkably awful, Teenage Mutant Ninja Turtles may bear the distinction of being the dullest movie ever made about talking bipedal reptiles.

Critics Consensus: Neither entertaining enough to recommend nor remarkably awful, Teenage Mutant Ninja Turtles may bear the distinction of being the dullest movie ever made about talking bipedal reptiles.

Critic Consensus: Neither entertaining enough to recommend nor remarkably awful, Teenage Mutant Ninja Turtles may bear the distinction of being the dullest movie ever made about talking bipedal reptiles.

The city needs heroes. Darkness has settled over New York City as Shredder and his evil Foot Clan have an iron grip on everything from the police to the politicians. The future is grim until four unlikely outcast brothers rise from the sewers and discover their destiny as Teenage Mutant Ninja Turtles. The Turtles must work with fearless reporter April O'Neil (Megan Fox) and her wise-cracking cameraman Vern Fenwick (Will Arnett) to save the city and unravel Shredder's diabolical plan. Based on the Teenage Mutant Ninja Turtles Characters Created by PETER LAIRD and KEVIN EASTMAN with a Screenplay by JOSH APPELBAUM & ANDRÉ NEMEC and EVAN DAUGHERTY, Teenage Mutant Ninja Turtles is produced by MICHAEL BAY (director and executive producer of the blockbuster Transformers franchise), Andrew Form, Brad Fuller, Galen Walker, Scott Mednick and Ian Bryce, and directed by JONATHAN LIEBESMAN (Wrath of the Titans).(c) Paramount

Will Arnett
as Vern Fenwick

Mikal A. Vega
as Sacks Bodyguard

Harley Pasternak
as Himself

The whole "TMNT" movie is over-inflated; like watching an otherwise tolerable music video, stretched out to 101 minutes.

The "heroes in a half shell" are back, except this time producer Michael Bay slaps on his style of action and over-dependence on CGI, or computer-generated imagery.

Teenage Mutant Ninja Turtles is uncomplicated fun, offering nothing new save for the sad novelty of seeing Megan Fox be treated like an actual human being.

Olivia Luder
One Room With A View
Top Critic

Those poor old Teenage Ninja Turtles should have been left tin hibernation.

Perhaps I'm overthinking a movie about Ninja turtles, but the film wants you to underthink and that's the problem.

The ninjitsu, pizza cravings, and hi-tech accouterments might not be so easy to digest if the imagery wasn't so familiar.

Why is April O'Neil the main character in a Teenage Mutant Ninja Turtles movie?

I feel like there was an opportunity to make something entertaining, and it was squandered by a movie that's simultaneously trying too hard and not trying hard enough.

Like it or not, Teenage Mutant Ninja Turtles stays gratifyingly close to Eastman and Laird's original vision. Nice one.

Nothing that made the original films (minus the third) fun and enjoyable was retained in this new revision of the series. Missing is the goofball humor, cheesy but acceptably fun storylines, and worst of all: the camaraderie between the turtles. All of this is replaced with generic blockbuster action sequences and no hint of style. This is just CGI overload with bad dialogue and rote storytelling. Worst of all it is completely uninteresting and boring. I'm willing to accept changes if done well, but all of the changes in the new version didn't work and it felt like the soul of the series was completely missing throughout. Do not waste your time on this.

Jonathan Liebesman dishes out the plain old cheese pizza in Teenage Mutant Ninja Turtles. Sliding in at a mere 90 minutes, it is a quick viewing. Aside from a mediocre 15 minute opening, the pace picks up and moves at a quick stride the rest of the way. The problem is that the back-story is poor, the characters aren't built up, and the plot details are too simple for its own good. A ton of action explodes its way onto the screen. Highly stylized and heavy reliance on CG is both its shining moment and downfall. The CG allows for some adrenaline packed material, but at the same time, there isn't enough down-to-earth martial arts choreography. The mixture of CG and real life characters don't work all that well. Megan Fox and Will Arnett have terrible characters and too much screen time in comparison to the real stars of the show, the 4 turtles. Thanks to the lack of time focused on the turtles, the voice-work takes getting used to; however, it is much better than watching any of the human characters. Teenage Mutant Ninja Turtles has its ups and downs leaving a picture that just slides on by.

Aside from the occasional turtle-humor, this live-adaptation is mediocre at best. Teenage Mutant Ninja Turltes' disarray origins strays away die-hard fans and its obscure narrative leaves audiences befuddled, leaving room for much, much more room for improvement if it's to launch into a brand-new film franchise. 2.5/5