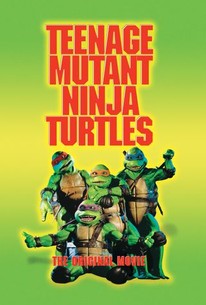 Critics Consensus: Teenage Mutant Ninja Turtles is exactly as advertised: one-liners, brawls, and general silliness. Good for the young at heart, irritating for everyone else.

Critics Consensus: Teenage Mutant Ninja Turtles is exactly as advertised: one-liners, brawls, and general silliness. Good for the young at heart, irritating for everyone else.

Critic Consensus: Teenage Mutant Ninja Turtles is exactly as advertised: one-liners, brawls, and general silliness. Good for the young at heart, irritating for everyone else.

Teenage Mutant Ninja Turtles: The Movie is the live-action, feature film adaptation of the cult comic book and the popular animated television show. After prolonged exposure to radiation, four teenage turtles--Michelangelo, Raphael, Leonardo, and Donatello--have mutated into ninjas and have begun living in the sewers of a large city. Under the guidance of a ninja master Splinter the Rat and television reporter April, the Turtles embark on a mission to run crime out of the city and battle the warlord Shredder. The Turtles have been designed by Jim Henson Productions and effortlessly fit into the live-action surroundings. ~ Stephen Thomas Erlewine, Rovi

Josh Pais
as Raphael/Man In Cab

James Saito
as The Shredder

The calculated money-grubbing motives are so obvious it overwhelms the delightful turtles.

So should you take your kid to see Teenage Mutant Ninja Turtles? I'm not recommending that you do - this movie will not enrich your child's worldview.

The one subplot that could have been milked, about a young friend of O'Neil's who falls in with the gang, is handled indifferently and fails to supply much in the way of a youthful identification figure.

The cynicism of the motion picture industry will be apparent to any child who is exposed to the many product plugs for a nationwide pizza delivery company.

As a movie, Ninja Turtles would make a better cereal. It looks like it needs a little milk and mother-wit poured over it, something to make it snap, crackle and pop.

Ninja Turtles is cluttered and flashy. In terms of plot, there's not much flesh on its bones.

The fights and stunts in Teenage Mutant Ninja Turtles are genuinely exciting, made all the more remarkable by the fact that they're mostly being done by guys in 50 pounds of foam rubber.

The unapologetically hokey humor and dialogue and characters have their charms for sheer late-'80s kitsch value.

Despite brisk direction by Steve Barron, plus unbridled energy and fine special effects, an overt glorification of violence is still at the crux of this stunt film.

A movie that displays two traits nobody would ever associate with the Teenage Mutant Ninja Turtles: It is grim and it is no fun.

Elias Koteas scores as a mock-turtle vigilante, and there are some nifty turtle effects from the Henson Creature Shop, but little else hits the target, despite Barron covering the cracks with fast editing.

Despite dated puppet effects and sometimes cheesy dialogue, TMNT the movie is also surprisingly darker and more mature than expected. They absolutely nail the tight bond between father and sons with the turtles and Splinter. The action sequences are fun to watch even though they are relatively simple because of the limitations of the puppets. I have a soft spot for this film because I loved it when I was a kid. I sat down and rewatched it with the same giddiness I had as a child and it made me feel young again. Ultimately, it's not a great film, but I enjoy it and if you grew up on it I'm sure it holds a special place for you too.

This live action "Teenage Mutant Ninja Turtles" film definitely feels like it pays tribute to the old show in many ways, while also going a bit too far in some moments. I felt like the puns overshadowed some of the scenes, which I'm sure it was intended that way, but it took me out of the film in some portions. The witty humour is perfect in this film and the Turtles are all portrayed in an enjoyable fashion. It's nothing spectacular, but the direction is fine, the script is good enough, the animatronics of the Turtles is pretty impressive for it's time and budget, and the fight scenes are hilariously awesome to watch. This film holds a place in my heart as being dumb amazing fun!

While looking a little cheesy, and not just the pizza, Teenage Mutant Ninja Turtles entertains for all of its 90 minutes. It isn't good clean fun for its entirety, as the the story manages to get some downtime and character going. That isn't necessarily a bad thing.

The costumes and the animatronics work well for its time. Excellent choreography stems from the martial arts sequences and it leaves the want for more, especially with the weapons.

Judith Hoag and Elias Koteas bring personality to the table and they do stand out amongst the human characters. The voicework of the turtles falls into place over time; perhaps not the greatest, but certainly acceptable.

Teenage Mutant Ninja Turtles spoils the pizza every once and a while, but all in all, it is a recommendable pizza delivery.