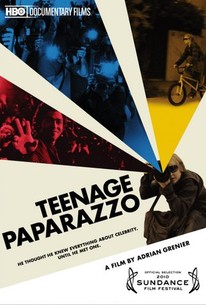 After several years of playing a famous actor on the HBO series Entourage, Adrian Grenier has become a celebrity in real life, and just as his show often explores the nature of fame in our culture, Grenier profiles a young man who is a unique product of our star-struck society in this documentary. One evening, while being pursued by a handful of celebrity photographers, Grenier noticed that one of them looked like a boy barely in his teens, and he later discovered that the paparazzo in question, Austin Visschedyk, was indeed just thirteen years old, but already working as a free lance photographer and earning up to $2,000 a shot for pictures of the right star. Home schooled by divorced parents who often give in to their young son's demands, Visschedyk prowls the streets of Hollywood at nights, keeping his eye peeled for a A-list personalities whose images are in demand from the tabloids and celebrity press, and while not all of his older colleagues care for Visschedyk, some admit that his youth makes it easier for him to find a cooperative subject. In Teenage Paparazzo, Grenier interviews Visschedyk, joins him for a night of stalking the famous and learns more about the nature of the celebrity press. But by turning a spotlight on his thirteen-year-old subject, is he only making his youthful ego more problematic? Teenage Paparazzo was an official selection at the 2010 Sundance Film Festival.

Naturally, to broaden the appeal of his documentary, Grenier appears on screen regularly; however, a good-natured fellow, he 'fesses up about his motives in the opening frame, then opines on the irony of so much reflected glory.

Teenage Paparazzo is a personal, point-of-view doc from Adrian Grenier, the star of HBO's Entourage, who shows there's an inquiring mind behind the pretty-boy charm.

...an entertaining, surprisingly informative look at the relationship between celebrities and the paparazzi...

Adrien Grenier's engaging documentary shows that a picture may be worth a thousand words, but it ultimately cannot capture a human being in all their complexity.

For audiences intrigued by, if not addicted to, stardom's nature, Grenier's film proves an entertaining, satisfying excursion.

Even though it starts out as an exploitation of 13 yr old Austin Visschedyk, Teenage Paparazzo evolves into an insightful exposé on celebrity culture ...AND it confirms the assumption that Paris Hilton is an air-headed attention whore.

Good documentary. Was more thought provoking than I would have expected. Very well done, although Paris Hilton doesn't do her dumb blonde rep any favors here!

The true story of a 14 year old celebrity obsessor, who becomes part of the paparazzi roaming the streets making 500-1000 dollars a photo. It is not only an amazing story to sit and watch, but it is beautifully made, and it is by far the best documentary of 2010. Entourage star, Adrian Grenier, takes us on a more than interesting journey into this kids life, with special appearances by half of hollywood along the way. Not once did I get bored, and I am willing to watch it over and over again! It was extremely inspiring!