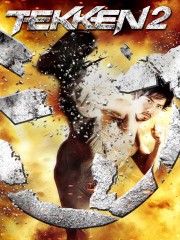 Daniel C
½ July 18, 2018
This movie is a snoozer. Found it hard to stay into this one and some scenes I honestly were confused as to why they even existed. I think Kane Kosugi did a decent enough job acting/fighting though.

½ August 24, 2017
Bad scripting, poor fight sequences. This movie drags worse than a snail. Even Kazuya's name didn't come out until an hour and 16 minutes into the movie. Guess like the plot of amnesia, the writers forgot to include anything important about Tekken in this movie.

Juan S
½ December 22, 2016
This movie bore me to death I really hate this movie really bad

David L
July 22, 2016
After a credible original instalment comes a sloppy second which I struggled to bear any resemblance with the video game. Not only that but I was confused as to whether the story was set before or after the first movie. Aside from the title character, there were practically no recognisable names, and what's worse is that the concept didn't include a great deal of quality fight scenes, and instead focused upon a lot more dialogue and character interaction. The acting was poor and on a cringeworthy level in some instances, demonstrating that people had perhaps been selected for their ability to throw a punch as opposed to speaking with any conviction (or talent). I was never expecting a blockbuster but was at least hoping for something easy to watch and not mentally challenging. Unfortunately I didn't even get that and instead had to endure what turned out to be a poor excuse for a prequel. Wouldn't call myself a true fan, but fanatics of this combat game would surely feel cheated and let down by this as there is simply no links to the popular arcade attraction.

Rex H
½ July 9, 2016
Worst movie I've ever seen and I enjoyed the intensity of the first one

Thomas G
½ March 29, 2016
#Tekken2 #KazuyasRevenge is a strange amalgamation of Hollywood licensing bullshit, and a pretty good action film. From what I could find, a film title #AgentX was in production, and was on track for a strong release. However, due to what most can only imagine to be the near expiring license for Tekken, the film was switched to being a prequel to the 2010 live action film. The product i the movie i watched tonight. There are many great things about the movie, such as the spectacularly choreographed fight scenes, and the acting of lead Kane Kosugi. Unfortunately weak supporting cast members and poorly added Tekken plot leaves the film very broken feeling. Some of the martial artists featured did will, and I am still a fan of Cary-Hiroyuki Tagawa's Heihachi. As a stand alone martial arts film, it is pretty enjoyable, but I just don't know if I really appreciate it as a Tekken movie. This is coming from someone who actually really liked the first film.

Aziz A
½ May 4, 2015
Irredeemable pile of shit.
Once you hear that priest talk, you know this will be an undesirable punishment, even if you had a will of iron you will leave before half the movie is gone.

Super Reviewer
Gimly M
½ February 26, 2015
Whatever cheesy value the first Tekken film had is lost in this completely unrelated prequel, which seems like it was made purely to retain the licensing rights. Blegh. Some of the martial arts fights are acceptable, but there is nothing that can save this directionless pile.

Piotrek P
½ February 16, 2015
This is not a Tekken movie. By exchanging the name of the main character, and two side characters, the movie is just about a guy with amnesia. Why anyone wanted to make this movie is beyond me, as even the fights seem duller than in the previous one, which is an achievement in itself.

Quincy T
January 30, 2015
I've quite enjoyed playing Tekken video games, a fact that makes watching this movie that much more unbearable. Let it be known that this movie is in no way, shape or form a representation of Tekken franchise. Simply slapping the namesake to some random script, which the movie clearly did, will not fool anyone. Regardless of how familiar one is to the game, the movie is undoubtedly terrible for anyone unfortunate enough of watching it.
Its abysmal story revolves around an amnesia-stricken man unceremoniously named K, but we all know it's Kazuya since the title spoiled it. After strings of strange events K is forced to join a fanatic group to become an assassin, doing strings of strange murderous tasks. The film should have used CG videos for the game or just random montages of martial arts, at least they would have made more sense. There is no structure at all in the storytelling, let alone clear motives and character developments. The game itself, being a fighting game, is infamous for its quirky story, but in comparison to this movie, it's Academy Award material.

The camera spams slow mo until the very last frame, even the simplest action such as going to market, cooking, staring blankly got hit by the slow mo. Not to mention the repetitive scenes, often the characters, especially K, have flashback of events from five minutes ago. K would walk the same path over and over while having this boring deep contemplation. His acting range consists of dumb stares and phone-in dialogues of internet tech support. He may very well be just a random guy, not the cruel notorious antagonist.

At least the production team could give him the Kazuya look or hairdo, but they either had such low budget they couldn't afford it, or were too lazy to even care. Setting is downright uninspiring, the whole movie is shot in some back alley, empty warehouse and shady village. This could be filmed at the wrong side of my city for all I know. With low acting quality of the cast and stupid logic of the movie, it's near unwatchable.

In the pantheon of awful game adaptations, Tekken: Kazuya's Revenge ranks as one of the worst, alongside its Uwe Boll's brethren.

Ted T
½ January 23, 2015
Kaos direction for the latest installment in the Tekken motion picture line is not only dry but is almost painful to sit though. This adaptation of the popular video game series not only removes the few interesting aspects from its predecessors but manages to add nearly every cliche possible from a story about a fighter who loses his memory.

This entire movie can almost be seen outside of the tekken continuity as our protagonist goes 95% of the movie before learning anything. The story of lone fighter attempting to ascertain his history while falling in love with a female nurse with only fifteen minutes of screen time.

Kosugi provides the audience a numb performance in which he has less range than a farmer on a 10x10 parcel of farmland. Each scene is forced and uncomfortable for what seems to be the actor, his cast and the audience. Wenham and Hiroyuki deliver equally poor performances.
The plot of this story seems stuck in one place for the majority of the film with no attempt to move forward, the story begins to focus on smaller obstacles for the protagonist and seems to completely forget the main story until the last ten minutes. The silver lining found in this film is found in the numerous hand-to-hand combat scenes in which Kosugi thrives.

Jeremy K
September 19, 2014
Hero? Boring. Secondary Female Lead? Dreadful. Guy who sort of looks like Bryan Fury from the game? Yes- for about two minutes? Cary Hiroyuki_Tagawa? Check (But watch Mortal Kombat if you actually wanted him to do cool stuff.). 90 minutes of my life I will never get back. Be warned!
Page 1 of 2