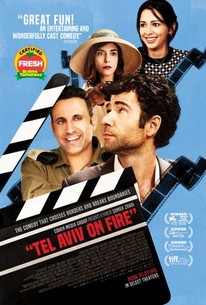 Critics Consensus: Thoughtful and well-acted, Tel Aviv on Fire highlights the awful absurdity of war -- and proves it's possible to find humor in the midst of cultural conflict.

Critics Consensus: Thoughtful and well-acted, Tel Aviv on Fire highlights the awful absurdity of war -- and proves it's possible to find humor in the midst of cultural conflict.

Critic Consensus: Thoughtful and well-acted, Tel Aviv on Fire highlights the awful absurdity of war -- and proves it's possible to find humor in the midst of cultural conflict.

Israel / Palestine, today. Salam, a charming 30-year-old Palestinian living in Jerusalem, works as a trainee on the Palestinian popular soap opera "Tel Aviv on Fire", produced in Ramallah. Every day, to reach the TV studios, Salam has to go through a rather difficult Israeli checkpoint. There he meets the commander of the checkpoint, Assi, whose wife is a big fan of the soap opera. In order to please him, Assi puts pressure on Salam to change the end of the show. Salam quickly realizes that Assi's ideas could be promoted to him as a screenwriter. Salam's creative career is suddenly boiling, until Assi and the soap opera producers and financiers disagree on how it should end. Stuck between an army colonel and Arab support, Salam can solve his problems with a final master stroke.

Amer Hlehel
as Nabil
View All

A lightweight but smart combination of satire, drama, and rom-com.

One spoiler: Tel Aviv does not burst into flames. But Salam's career might.

Alas, the potential for sharp political satire takes a back seat to small screen spoofery, nudging this more in the direction of Soapdish, rather than Joe Dante's transcendent The Second Civil War.

Zoabi relies on the old adage that we have more in common than not, but it's a lesson that bears repeating - particularly when laughs come with it.

In offering a comedic take on not just the hostility between Israelis and Palestinians, but also the shared history and culture that bind them, "Tel Aviv on Fire" is an enjoyable respite from the bleakness that is far more typical of their stories.

Following a soap opera that muddles through the day to day, Sameh Zoabi's film is lightweight and a little repetitive, but its valuable insight is that in many senses, political reality works in rather the same way.

Honest in its approaches, with graceful lightness until the last few minutes. [Full review in Spanish]

While you may need a scorecard... to unravel all the plot-lines and twists, remember that this is a smart political satire from a very tough neighborhood, where laughs are often hard to come by.

This movie is situated in the hemisphere of The Reports on Sarah and Saleem and many others that try to highlight the conflict between Palestine and Israel, but its novelty is its humor. [Full Review in Spanish]

[Dan Kleinman and Sameh Zoabi] put their mark on an intelligent script. [Full review in Spanish]

[The jokes] poke fun at the torpor Bassam shoves onscreen, and even if they succeed, said bits are shallow and the film confines its characters to a proscenium as a result.

There are no featured reviews for Tel Aviv on Fire at this time.