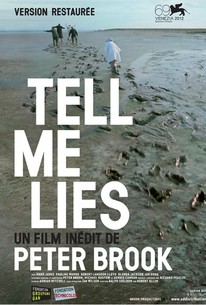 Subtitled A Film About London, this drama is a quintessential experimental counter-culture film of the late 1960s that centers on the questions raised by the Vietnam war. Renowned Shakespearean theater director Peter Brook serves as producer and director. It includes many members of the Royal Shakespeare Company, such as London actors Mark Jones, Robert Lloyd, and Pauline Munro, who essentially play themselves. They become obsessed with a photograph of a wounded Vietnamese child and begin discussing the war with their friends and fellow actors. They attend a series of lectures and teach-ins, discussing the issues of the day with a number of activists, including the American Black Panther leader Stokely Carmichael. The discussions are combined with newsreel footage in a bizarre collage of images. Moved to do something, the group of actors puts on a series of skits about the war. ~ Michael Betzold, Rovi

Critic Reviews for Tell Me Lies

The rest is abysmal and boring-as though slapdash work had a special authenticity, and the Angry Arts had an obligation to make even less sense than anybody else.

The pity is that Tell Me Lies is such a timely film and suffers out of context. It was made in the heat of battle and sought no more audience or influence than was immediately available.

That last shot, so self-indulgent and so wrong.

There are no featured reviews for Tell Me Lies at this time.