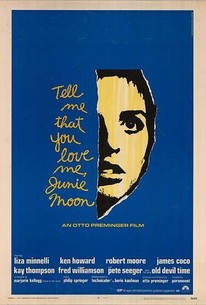 Tell Me That You Love Me, Junie Moon Photos

Upon completing Tell Me That You Love Me, Junie Moon, a tearful Liza Minnelli declared publicly that she would never, ever work with tyrannical director Otto Preminger again. Worse luck for her: Junie Moon contains what may well be Minnelli's best non-musical performance. Based on the novel by Marjorie Kellogg, the film surprisingly manages to evoke humor and pathos from some of the least promising material in movie history. Minnelli plays an emotionally imbalanced young girl whose face is horribly disfigured by her psycho boy friend Ben Piazza. Ken Howard is cast as an epileptic who has wrongly been diagnosed as mentally retarded. And Robert Moore (future director of such films as The Cheap Detective and Murder by Death) portrays a homosexual, confined to a wheelchair after a hunting accident. After meeting one another in a hospital, these three social outcasts decide to move in together, forming a united front against a cold, judgmental world. The devastating events that follow might have lapsed into the grotesque and exploitational, but director Preminger is extremely careful to depict his protagonists as three-dimensional human beings rather than "freaks." Unfortunately, some filmgoers, assuming that any film with a title like Tell Me That You Love Me, Junie Moon just had to be a campy laff riot, were turned off by the repellant aspects of the early scenes and refused to give the rest of this fascinating film a chance.

Pete Seeger
as Himself

Pacific Gas And Electric
as Theirselves

Critic Reviews for Tell Me That You Love Me, Junie Moon

Preminger doesn't direct movies as much as he makes frontal assaults on them.

All this is well mounted and lensed but sans the right dramatic flourishes to get human depth, melodramatic gusto or humane symbolism into the right focus.

The style hesitates between no-stops melodrama and glacial reserve without really finding a meaningful perspective on the action.

It succeeds, among other things, in making human entertainment out of a rather unlikely story.

The script is little but a series of smart aleck exchanges/platitudes.

I'll say this for Tell Me That You Love Me, Junie Moon. It's a film that takes a big roll of the dice. Is it wrenching? Is it wacky? Well, it's definitely weird.

A scarred young woman, a paraplegic homosexual, and an epileptic decide to throw in their lots together in this earnest comedy-drama. Sound like fun? It isn't.

Audience Reviews for Tell Me That You Love Me, Junie Moon

Dated drama of three misfits still offers some fine acting by Liza Minnelli as a scarred, both physically and emotionally, young girl. Made just before Cabaret this is the last time the subdued non star Liza persona would be evident in a film. She speaks a line here "What would I do with sequins?" which while true for the character evokes unintentional laughter since the performer is now unimaginable without head to toe sparkles of some kind.

Tell Me That You Love Me, Junie Moon Quotes