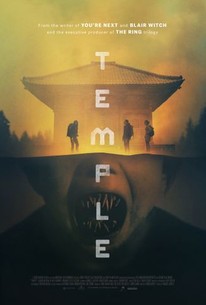 Three American tourists follow a mysterious map deep into the jungles of Japan searching for an ancient temple. When spirits entrap them, their adventure quickly becomes a horrific nightmare.

There is no monster at the end of this story, only boundless regret, and tedium.

The movie gets lost in a thicket of horror-movie cliches. Heroes wandering off at just the wrong moment to empty their bladders. Too-dark scenes, lit entirely by bouncing flashlights.

Temple comes off as more of a half-hearted attempt at exploiting typical J-horror themes than an actual homage to the Japanese genre.

Problems aside, it's refreshing to stumble on a film of this genre that doesn't fall under the "standard order horror" umbrella where an avalanche of jump scares replaces attempts to generate a pervasive sense of unease.

It fails to provide any real scares and adheres to well-worn tropes without a fresh twist.

The film is only in the business of supplying the sort of fear that hinges entirely on the shock of the exotic.

I almost wish the film had been less of a sketch and more of a fully formed idea, giving the characters more room to develop and the temple's legends more color and depth. Still, what's here has a handful of worthy moments of terror and intrigue.

A solid example of how to do an Americans travelling abroad sub-genre flick that doesn't fumble around in Asian culture simply for fumbling's sake.

Temple falls apart repeatedly throughout its 78-minute running time, with a story that feels truncated, characters that never really make any sort of impact, and a few "twists" that really aren't twists at all.

Temple is an endurance test to see how much of nothing a viewer can take before daydreaming, playing a cell phone game, or nodding off.

I liked it being set in Japan, and for unknowns the acting was decent, plus the Japanese cast were good, but the ending is very confusing and didn't tie up properly with a lot left unanswered. The little Japanese boy was genuinely creepy. Could have been much better than it ended up being.