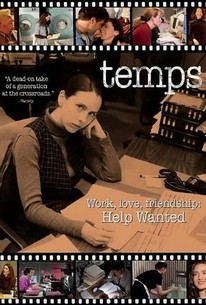 An indie Gen-X film recalling the The Big Chill (1983), this movie concerns a group of friends in their late 20s who are still working out what they want to be when they grow up. Ally, a fledging filmmaker, jumps from one temp job to another; her boyfriend Ben works as a consultant, though he wants both a more permanent job and a relationship; and their friend Jane is a gynecological model, stripper, and entrepreneur. All of the characters suffer from an overabundance of choice. Fearing that they will make the wrong one, they instead shuttle from one temporary job to the next. Only when Ally dares to risk failure does she find the means of success.

Kim Mansfield
as Angela
View All

There are no critic reviews yet for Temps. Keep checking Rotten Tomatoes for updates!

There are no featured reviews for Temps at this time.