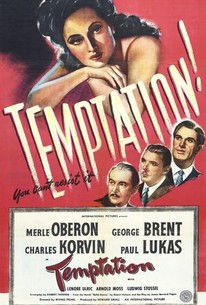 Temptation is an appropriately moody romantic melodrama, providing a golden opportunity for some memorable histrionics by star Merle Oberon. Set in Egypt (courtesy of the Universal backlot), the film casts Oberon as Ruby, the new wife of wealthy archaeologist Nigel (George Brent). Unbeknownst to her husband, Ruby has had quite a checkered past, involving several divorces and gosh only knows how many extramarital affairs. While Nigel is out digging up an ancient mummy, Ruby takes up with Baroudi (Charles Korvin), a slick but impoverished Egyptian opportunist. When Baroudi threatens to leave Ruby unless she puts her husband out of the way, she methodically begins to poison the unwitting Nigel. Only in the last few minutes does Ruby realize that she's throwing her life away -- not to mention her husband's -- for a no-good heel, setting the stage for a spectacular revenge-and-retribution finale. Temptation was International Pictures' final production before its merger with Universal. ~ Hal Erickson, Rovi

Jean Ransome
as Receptionist
View All

A not too successful rehash of that venerable Robert Hichens piece Bella Donna.

There are no featured reviews for Temptation at this time.