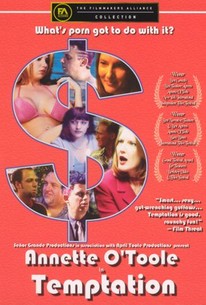 American independent filmmaker Kim Caviness makes her directorial debut with the satirical comedy drama Temptation, made according to the rules of the film movement parody "Dogme 69." Nora (Annette O'Toole) and Phil (producer/co-writer Lyn Vaus) are a married couple who make sex-positive pornography in the Valley. Just when the money stops coming in and they're about to call it quits, they discover some old raunchy video footage of the latest trendy young television star. The media frenzy surrounding the tapes threatens to overtake their values with the promise of easy money while they struggle to maintain their integrity. Includes cameos by XXX stars Randy West, Bridget Powerz, and Kiki Daire. Shot on Digital Video.

Randy West
as Himself

Peter Downing
as Reporter
View All

There are no critic reviews yet for Temptation. Keep checking Rotten Tomatoes for updates!

There are no featured reviews for Temptation at this time.