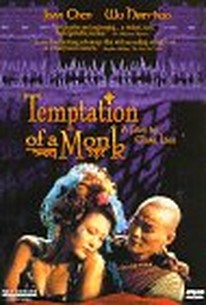 You Seng (Temptation of a Monk) Photos

This melodramatic epic martial arts outing from Hong Kong filmmaker Clara Law is set in 7th-century China and center's on a disgraced warrior's quest for redemption. Formerly a general, he trustingly made a devil's bargain with a rival general that resulted in the assassination of his troops and the prince he was sworn to protect. Though every part of him aches for bloody vengeance, the fallen fighter follows his mother's advice and becomes a peaceful wanderer. He tries, but things don't go the way he hoped for everywhere he goes. His nemesis attacks, and, before long, kills everyone the good general cares about, including his lover, a beautiful princess. He finally finds solace in a remote Buddhist temple where he undergoes instruction from elderly monks. This time trouble comes in the form of a beautiful widow, a woman who looks exactly like his slain love. On the heels of her betrayal comes the wicked general and before the heroic warrior can find lasting peace, he must survive one last battle. ~ Sandra Brennan, Rovi

Critic Reviews for You Seng (Temptation of a Monk)

Visually sparkling as a period piece costume epic, but it emotionally fails to grab me.

Audience Reviews for You Seng (Temptation of a Monk)

There are no featured audience reviews yet. Click the link below to see what others say about You Seng (Temptation of a Monk)!

You Seng (Temptation of a Monk) Quotes