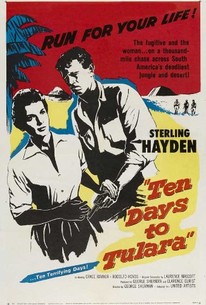 Scotty (Sterling Hayden), a charter pilot operating out of Mexico, is forced to join up with a criminal gang when his son is kidnapped. Cesar (Rodolfo Hoyos), the leader of the gang, wants Scotty to help the crooks escape to freedom with $250,000 in stolen money. The plane crashes, forcing Scotty and the gang to make the rest of their getaway on foot and in hijacked cars. Along the way, Scotty falls in love with Cesar's semi-honest daughter Teresa (Grace Raynor). From the looks of things, Ten Days to Tulara began as a documentary of Mexican native ceremonials and dances, with the plotline tacked on to keep the audience from nodding off. In any event, it's curious that the ABC network chose this very modest programmer as one of the entries in their 1962-63 Hollywood Special movie package, along with Inherit the Wind, The Magnificent Seven and On the Beach. ~ Hal Erickson, Rovi

Paco Arenas
as Chris
View All

There are no critic reviews yet for Ten Days to Tulara. Keep checking Rotten Tomatoes for updates!

There are no featured reviews for Ten Days to Tulara at this time.