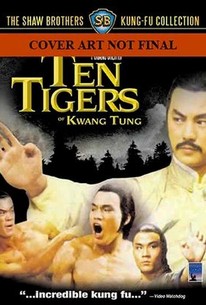 Chang Cheh directs this old school Shaw Brother produced kung fu yarn. The film opens with members of the Ten Tigers group getting attacked by a pair of mysterious assailants. The film then flashes back several years previous to focus on Ming partisan Chu (Ku Feng) who is on the run from Manchu forces. Local merchant and kung fu enthusiast Li Chen-chau (Ti Lung) gives the fugitive shelter in his pawnshop and quietly recruits some of his fellow martial master associates to help protect the lad. When Li's professional rival rats him out, Manchu official Liang (Johnny Wang Lung-wei) not only orchestras his army but fools a couple other kung fu masters including Beggar Su (Phillip Kwok Tsui) into helping his cause. After a heated battle, Li manages to convince Su to joining his cause, thus forming the Ten Tigers. The film then snaps back to the original storyline, where the identities of the mystery assailants are revealed. ~ Jonathan Crow, Rovi

There are no featured audience reviews yet. Click the link below to see what others say about Guangdong shi hu xing yi wu xi (Ten Tigers from Kuangtung) (Ten Tigers of Kwangtung)!