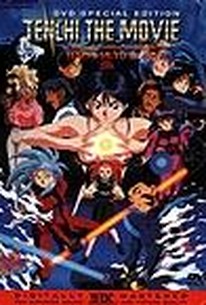 In this first feature of the popular animated franchise, Tenchi and company find their lives disrupted by the time-traveling entity Kain, who escapes from subspace and threatens revenge upon the Jurai royal family (including its emperor, Tenchi). Kain goes back in time to 1970 to kill Tenchi's mother before he is born, so Tenchi and friends follow him. Seeing his now-dead mother alive in the past opens old wounds for our hero.

Critic Reviews for Tenchi Muyô! In Love (Tenchi: The Movie)

There are no critic reviews yet for Tenchi Muyô! In Love (Tenchi: The Movie). Keep checking Rotten Tomatoes for updates!

Audience Reviews for Tenchi Muyô! In Love (Tenchi: The Movie)

Tenchi is some kind of magical royal heir; a supercriminal goes back to the past and kills his mother, which means that he and his coterie of psychic female friends must time-travel to mom's high school days to try to assure Tenchi will eventually be born. This feature-length spinoff of a Japanese TV series is generic anime fantasy stuff that makes no attempt to explain the characters or the setting for newcomers, and gives no indication why the show was ever popular.