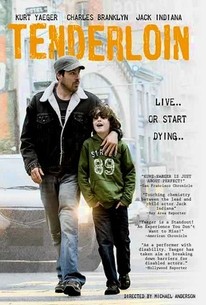 A damaged Iraq War veteran moves into San Francisco's notorious Tenderloin district with the intention of drinking his life away, but instead finds his grim mission complicated by the appearance of some colorful characters who refuse to take life's punches lying down. If you live in San Francisco and you've run out of options, chances are you'll wind up in the Tenderloin district. It's only a block away from some of the most glamorous shops in the city, but it may as well be another world. What this refuge for lost souls lacks in glamour it more than makes up for in diversity, and the people who dwell there take a curious sort of pride in their unwavering resiliency. All Ben (Kurt Yaeger) wanted was to disconnect from the world and whither away on his own accord, but his young son Robby (Jack Indiana) and his new love interest Skyler (Tina Huang) aren't about to let that happen anytime soon.

There are no critic reviews yet for Tenderloin. Keep checking Rotten Tomatoes for updates!

There are no featured reviews for Tenderloin at this time.