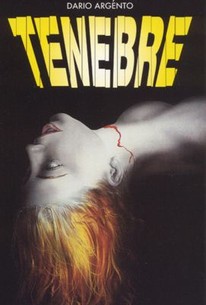 Despite the lurid slasher-movie trappings of his output, filmmaker Dario Argento has always been able to attract "name" actors to his projects. The Unsane (original title: Tenebrae) stars Anthony Franciosa as a man bedeviled by constant death threats. If Franciosa's unknown nemesis intends to drive his victim crazy, he's certainly doing a bang-up job. As with most of Argento's films, The Unsane concludes with a lovingly detailed bloodbath. Literate dialogue and excellent cinematography (courtesy Luciano Tovoli) elevate this film from the usual slice-and-dice syndrome.

Unpleasant even by contemporary horror standards.

Tenebre is a brilliant piece of self-reflexive cinema.

Some outstanding murder set pieces fill a convoluted narrative, but that's par for the course for a giallo, isn't it?

all at once twist-heavy giallo & sophisticated meta-giallo, as Giermani & Neal, in repeatedly discussing the mechanics & modes of Neal's chosen literary form, are also providing a constant commentary on the genre in which they have become involved

Tenebre is essential Argento: perhaps the auteur's clearest articulation of his own psychological and stylistic obsessions, but with a more critical eye.

Rather more aggressive towards its viewer than one expects, and more surprising than a body count mystery in 1982 has any right to be at all.

Argento delights in tripping up audiences with startling plot twists and bursts of extreme violence.

The film synthesizes all the familiar Argento motifs (psycho killers, bloody violence, convoluted plot twists, pulse pounding music) into an almost perfect symphony of fear that overcomes many of his traditional shortcomings.

In a way, it could be [Argento's] most personal film.

Tenebre is possibly Argento's most overtly sexual film, and at the heart of it lies an all-too human fascination with sexuality in all of its desirable and frightening forms.

Interesting, but a bit underwhelming.

It's no Bird with the Crystal Plumage, or Deep Red (or Suspiria for that matter), but Tenebre is still one hell of a giallo.

After the opening credits the film starts in New York, as American author Peter Neal (Anthony Franciosa) cycles to JFK airport. He flies to Rome so he can promote his new murder mystery novel 'tenebrae'. Meanwhile in Rome a woman tries to steal a copy of the book from some shop and is caught. She convinces the security guard to let her off. But someone in the store is watching her and has seen whats happened. Back at her flat she is attacked, pages of the book 'tenebrae' are forced into her mouth and her throat is slashed with a straight razor, just like the one the killer uses in the book. The police head straight for Neal to question him, while there Neal receives a letter and phone call from the killer, from then on Neal is thrown in a complex mystery and plunged into the centre of a number of senseless, violent murders. Written and directed by the overrated Dario Argento this is definitely one of his best films. Stylishly filmed with visually pleasing photography, the stand out sequence being the murder of the two lesbians, the camera starts outside of a window looking in at one of the victims, it then moves up a level to another window, it moves across the side of the house to yet another window in which the second victim can be seen playing a record, then the camera moves up toward the roof, glides along it and back down the opposite side of the house from which it started to rest on the killers gloved hand breaking into the house. All in one smooth flowing shot, very impressive. Add to this lots of close ups, strange angles, free flowing camera movements and a nice color scheme, and we have a very good looking film. Acting is OK, most of the lead characters are a little bit bland. While the film does contain a nice amount of nudity, violence and gore it is perhaps a little more restrained than you might expect, except for a scene towards the end of the film where a woman has her arm chopped off with an axe, how much blood?! Having said that the murders are very well done, and Dario films them with style, like the rest of the film. Script wise, I liked the twists and turns but the reasons for some of them didn't make much sense. And one or two bits stray into silly horror film cliché, like the dog attacking the girl, my least favorite sequence in the film. Overall a very good horror mystery. Make sure you listen and pay attention otherwise you may miss some vital plot points, like it appears some of the people who have reviewed it on Flixster did. One negative would be that once you have watch tenebrae once I don't think many people would be interested in watching it again, as once all the twists are revealed it loses its mystery and impact a little. Certainly worth a rent, recommended. The negative aspect of the film is the same with all of Argento's work. Its really rather dumb. The story and situations are never once believable. Despite being one of Argento's more compelling stories in a film, its still pretty far fetched. Many of the sequences, despite being frightening, are completely implausible when thought of, which definitely lessens the initial shock (the dog chase sticks out in particular). Also, there's not a single interesting or sympathetic character here, which is needed to make the deaths more effective. The acting, outside of the always enthusiastic and watchable John Saxon (who should have gotten the lead role instead of a small supporting one), is very wooden. Apparently Anthony Franciosa was drunk throughout filming and it shows. Despite all this, the film is still very suspenseful and moves at a quick pace. One other aspect that I really enjoyed about "Tenebre" was the seemingly self-referential moments. The critics of the main character (who is an author) accuse him of misogyny or attempt to read into subtexts of his work which he knows simply don't exist, both of which Argento went through. "Tenebre" is recommended if far from perfect.

Directed by Dario Argento and starring Anthony Franciosa, Christian Borromeo, Mirella D'Angelo, Veronica Lario, Ania Pieroni and Eva Robin's. Dario Argento's surprisingly underrated film that was hated by critics in the early 80s in a cut version under the title of Unsane. Today some critics hail this as the best movie he ever wrote or made, Personally my favourite by Dario and one of my top 5 is Deep Red by far. But Tenebrae deals with many emotional themes unlike so of his other films including the horror of dealing with your own personality and explaining your existence and will to live. It's start of as your regular stalk and slash movie like any low grade slasher but then turns into something that nightmares couldn't even hold. Peter Neal is a famous American writer promoting his new book Tenebrae that has just become a bestseller in Italy. Before his arrival a shoplifter is murdered in her home by an unseen assailant with a razor and stuffs the books pages in her mouth. During his stay two lesbians are killed in their home in the same way as the shoplifter and so on. The Killer claims to be "cleansing the streets"-Page 106 Tebebrae. Peter Neal suspects the killer is the new station agent or his best friend that works over there...But in your judgment who is the killer? [IMG]http://i55.tinypic.com/1zqpj4o.jpg[/IMG] Before making this film Dario says that a fan stalked him and left death threats on his phone and after this incident it became the basic plot for Tenebrae. 90% for story: I showed Tenebrae to one of my friends who is into Mystery books and films and so on and it became a favourite of hers easy, Its compelling and gripping and the ending is a big WTF. Though you need to watch this more than once to understand it and the Themes that imply with the film. 95% for characters: to understand who our killer is you need to view this film in a whole direction then just looking but listen and keep your ears open to what they say and watch what they do, Another plus for the dialogue that fits so well with all this stuff. Some of the characters are pretty disturbing if you understand there back story's and there bridge to sexuality. 80% for acting: Not always good John Saxon shows us he can still act and along with Anthony Franciosa who plays our main lead. Nothing to brilliant but also some exceptionally good dialogue that's not to complex to understand. 87% for special effects: They look a bit outdate but they still hold up a good and I won't argue with the result, and also the film had the world's longest tracking scene until the children of men. 90% for everything else: If you like these kinds of movies Tenebrae is a clear example of creative mystery movie. By the end Tenebrae is essential viewing for any fan of mystery films or Giallo's in general. BTW my friend guessed the ending by the middle of the movie because she is so good at these kinds of films. And she listens closely to the dialogue being said. Keiko's score 89-100. BBFC Rating-18 (Edited version)(Banned from 1984-2003) Eirin Rating-R-15 (Uncut)