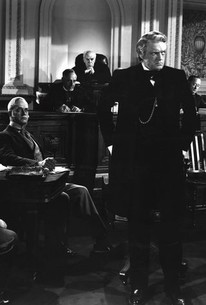 The tumultuous presidency of 17th-president Andrew Johnson is chronicled in this biopic. The story begins with Johnson's boyhood and covers his early life. During the Civil War, Johnson stays a staunch Unionist and upon Lincoln's reelection in 1864, becomes his Vice President. After Lincoln's assassination, Johnson becomes the President. ~ Iotis Erlewine, Rovi

Porter Hall
as The Weasel

Harry Worth
as John Wilkes Booth

Roy Barcroft
as Officer on Crutches

Russell Hicks
as Emissary
View All

Although Johnson has been pegged as an incompetent and racist narcissist (hmm, sounds familiar), this interpretation is naturally missing from this movie.

Ignoring, for a moment, the fact that Tennessee Johnson basically gets the heroes and villains of this story completely flip-flopped, it's also extremely dull, representing the worst of MGM's glossy prestige drama instincts.

Matthew Lucas
From the Front Row
View All Critic Reviews (2)

There are no featured reviews for Tennessee Johnson at this time.