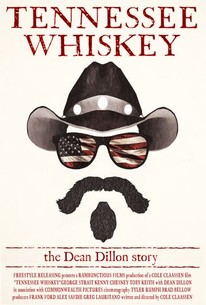 Dean Dillon wrote over 30 #1 hit songs for the biggest artists in country music over the past four decades, yet most have never heard his name. George Strait, Kenny Chesney, Toby Keith, Lee Ann Womack, Brooks and Dunn, Pam Tillis and the list goes on. Oh, and that song by Chris Stapleton, Tennessee Whiskey, yeah he wrote that too. Considered by many to be the last troubadour of songwriters, Dean is back on the road singing his songs and telling his stories in honky tonks and bars, stories behind the song that played when you had your first kiss, the first dance at your wedding, the one on the radio when your child was conceived. A legend in Nashville, yet relatively unknown outside of music city, Dean finally comes out of the shadows and shares his music, his life, and the stories behind the hits in this honest film about a man responsible for songs that shaped an era and helped to create some of music's biggest rock stars.

There are no critic reviews yet for Tennessee Whiskey: The Dean Dillon Story. Keep checking Rotten Tomatoes for updates!

There are no featured audience reviews yet. Click the link below to see what others say about Tennessee Whiskey: The Dean Dillon Story!