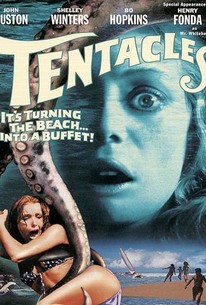 Bo Hopkins
as Will Gleason

The movie sacrifices three great actors that are worthy of better enterprises. [Full Review in Spanish]

It's pretty rancid, although it's the perfect party picture to screen in the background as your guests get suitably soused.

John Huston and Shelley Winters in a clunky monster movie? Even the Octopus is up in arms.

As these things go not as bad as Avalanche or The Swarm but still no great shakes with the big name cast members strictly collecting a paycheck.

AMC was having an all-day marathon today of old horror classics. Among the ones I watched was "Tarantula," "The Deadly Mantis," "Frogs," and "Tentacles." Without a doubt, "Tentacles" was the worst one of the bunch, and it was the only one that I watched that day that I didn't like. "Tentacles" is about an octopus that scares people in a seaside community. It's pretty much a ripoff of "Jaws," and a TERRIBLE one at that! Even though it has a cast that consists of two or three credible people such as John Huston, none of the cast did that great of an acting job in this film. Also, since this movie was made in 1977, you would expect it to have pretty good special effects, but again, it's a disappointment. As for the movie itself, about the only redeeming quality I noticed the entire movie was the musical score, which wasn't bad. You don't get to see a whole lot of the enemy, the octopus, in "Tentacles," but when you do, it's always underwhelming. The octopus looks like an octopus, but the movie just isn't scary, exciting, or suspenseful at all. If you're a fan of horror movies, I recommend skipping "Tentacles." NOTE: That was my Amazon review from the year 2002.