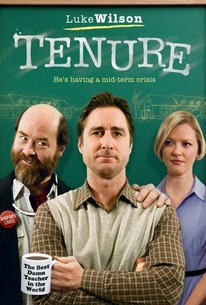 An English professor at a small private college finds his shot at tenure threatened by the sudden arrival of a pretty Yale PhD. onto the staff in this collegiate comedy form the producers of Rushmore. Charlie Thurber (Luke Wilson) isn't interested in school politics, and as a result his career is stalling out. But Charlie's a hit with the students, so when his chance for tenure comes up he's confident he'll get a fair evaluation. That confidence is shaken, however, when Elaine Grasso (Gretchen Mol) is hired on to the English staff. A published writer from a prestigious pedigree, Elaine has accomplished the things that Charlie's only dreamt about. Even Charlie's aging father, a celebrated professor, seems disappointed that his son hasn't accomplished more. Enter Jay Hadley (David Koechner); Jay is an anthropology teacher at the college who also happens to be Charlie's best friend. Jay isn't willing to sit idly by while Elaine takes Charlie's job, and is soon channeling all of his energy to sabotaging the well-intending newcomer's career. But despite being envious of Elaine's accomplishments, Charlie just can't bring himself to hate her; on the contrary, his attraction to her is growing by the day. As the time comes to make some decisions that will most certainly affect the course of his career, Charlie realizes that the only path worth walking is the one that you carve out for yourself. ~ Jason Buchanan, Rovi

Hilary Pingle
as Robin
View All

A tonally unfocused dead zone of a movie. It's as if director Mike Million only settled on the title of Tenure because he was afraid that "A bunch of scenes that don't go anywhere: The Movie!" wouldn't fit on a marquee.

quite quirky and funny, luke wilson is a talent not recognised by confident directors.

Familiar, ultimately forgettable, and only sporadically funny, Tenure is still entirely watchable because of the great charm and personality Luke Wilson brings to the table, carrying the film through itsâ(TM) more meandering moments.

The story of a smart, but insecure guy Charlie Thurber (Luke Wilson) seeking to renew his tenure in a small time College in the United States. He feels threatened when the Dean hires Yale's English Professor Elaine Grasso who's as beautiful as she is brilliant. Together with his best friend, they declare Elaine as their enemy and try to sabotage her in school. A sub-plot revolves Luke's aging father who's been placed in a retirement home. Luke Wilson is a decent actor but I just didn't find it funny.