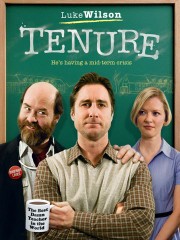 Harrison R
October 26, 2016
I really enjoyed this very real exploration of what it's like to teach and not sell out. The solution is very plausible, too. David Koechner didn't stink it up too bad, either.

Brian S
July 13, 2013
Tenure isn't a great movie, but it has heart. Witness how the bearded David Kochner (the Office's obnoxious Todd Packard) is almost unrecognizable as the (relatively) mellowed anthropology teacher genuinely convinced of the existence of bigfoot. Koechner's obsession may seem like a liability in a film set in reality, but it turns into an effective running joke. When two of Kochner's graduate students find a fresh yeti footprint but are unable to take a proper cast before it is destroyed by rainfall, he warns them that West-Coast skeptics will claim it was a hoax. He then effectively mentors them through their comedically perfect outrage and grief.

Likewise, Luke Wilson as (assistant) professor Charlie Thurber quickly abandons his sinister plan to dis-credit his new competition in the Clark College literature department, and instead help her adjust and get comfortable in the classroom--even as a well-meaning Koechner sabotages her in torturously small ways.

The film borders on the dramedy with scenes of Charlie's father, a former Princeton professor (with tenure!), now a widower struggling with alternating mental sharpness and senility. Bob Gunton is good even as his character seems to lack a moral center, sometimes prodding his son for his underachievement, but then moving quickly toward an inevitable but less cathartic than might have been reconciliation as he assures Luke that his teaching ability sets him apart.

The movie works because the characters never go to cheap lengths to make us laugh, or end up caught up in elaborate lies that spiral out of control and require unrewarding scenes of strife as they attempt to get back on track. They work because the characters give each other the benefit of the doubt and don't spend much time shouting or acting in ways that disqualify them for friendship in the first place.

So I'd say it is worth a chance.

Jesus H
July 11, 2013
This is one of the few movies I think are under-rated. Wilson did a good job. It is a feel good movie and teaches to do what we are passionate about, not what is expected from us.

FilmGrinder S
May 18, 2013
82%
"I thought when I got this age, things would be easier, but everything gets more absurd."-William Thurber (Bob Gunton)
What, TENURE should be a raunch comedy? It's not about OLD SCHOOL frat parties.
"The food at Yale is positivly exquiste, Beth."-Warren (Andrew Daly)
Oh yeah, the business about bigfoot was awesome.

Russell G
April 9, 2013
I like the foundation for the story and the cast is likeable but it settles for a low dose of light humor. Instead of poking fun at academic culture and escalating situations to more exaggerated and goofy tone, this movie gets caught in an awkward place that does not result in a high laugh count. Luke Wilson leads a capable cast that makes the most of the given material. It is enjoyable but not memorable, and has its share of moments that come off as odd rather than funny. The shame is that the characters are developed well and the emotional side is well done for a comedy. With more humor this would have really worked, but as it stands it is not strong enough to excel as a romance, drama or comedy.

Mikey S
½ September 20, 2012
So I was searching netflix and I found TENURE staring Luke Wilson, Gretchen Mol and David Koechner. This independent movie made me laugh so hard and wished I seen this funny movie sooner. TENUREâ(TM)s got a great story, a awesome cast and should not be missed
@mikes_moviepick

David G
½ July 2, 2012
This movie has some severe troubles in moving along and stirring up interest.

mikey s
½ May 15, 2012
So I was searching netflix and I found TENURE staring Luke Wilson, Gretchen Mol and David Koechner. This independent movie made me laugh so hard and wished I seen this funny movie sooner. TENUREâ(TM)s got a great story, a awesome cast and should not be missed
@mikes_moviepick

Pete S
½ May 13, 2012
Not actually all that bad. Predictable, but generally entertaining. Mostly just a group of (generally unconventional) quirky characters to laugh at & with.

Super Reviewer
Brendan O
April 20, 2012
quite quirky and funny, luke wilson is a talent not recognised by confident directors.

Lisa W
½ February 24, 2012
No surprise this never made it to theaters. But an easy comedy as background while I was doing other things.

Marilee A
½ January 11, 2012
Slow, and a bit awkward.The only thing entertaining about this Film was the Crazy Best Friend,David Koechner as Professor Jay Hadley,who liked to smoke pot, slash his other professors tires, & Toilet Paper his Deans house, if it weren't for his childlike hehavior, this Movie would be like watch Grass grow.

Danica A
½ December 18, 2011
Had a few funny moments with the sex-crazed students and the search for bigfoot. For the most part though it was not entertaining in any way. If the movie doesn't pull me away from cleaning the house, that means it wasn't good. I do not recommend.
Page 1 of 6