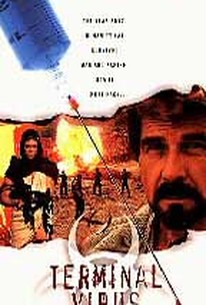 A handful of brave survivors must contend with an unusual sort of post-apocalyptic crisis in this science fiction drama. The earth has been decimated in the wake of World War III; while massive thermonuclear attacks wiped out most of the major cities, an experimental biological weapon was released that spread two artificial viruses, one of which would infect men and another which would infect women. When the two viruses are brought together during sexual intercourse, the result is instant and painful death for both parties, and the deadly spread of this weapon has meant that humanity as we know it is doomed to eventual extinction. However, Calloway (Richard Lynch), the leader of a battalion of all-male ravagers who plunder the post-nuke plains for whatever they can find, discovers a community where men, women, and children are actually living together in something resembling civilization. It seems that a scientist was able to develop a serum that rendered the twin viruses harmless; however, the inventor is killed as Calloway and his men raid the village. The inventor's son, Joe Knight (Bryan Genesee), survives, and he must learn the secrets to his father's formula. He gets some unexpected help from McCabe (James Brolin), a renegade peacekeeper on the run from Calloway, and Shara (Kehli O'Byrne), who with McCabe is eager to discover the formula for the serum and begin repopulating the world. Roger Corman served as executive producer for this project.

Susan Africa
as Queen of the Amazons

There are no critic reviews yet for Terminal Virus. Keep checking Rotten Tomatoes for updates!

There are no featured reviews for Terminal Virus at this time.