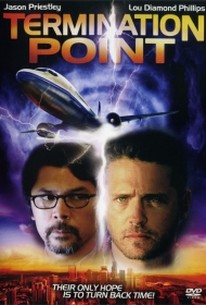 The United States military has made a revolutionary breakthrough in time travel technology, and now it's up to one special agent to ensure that a dangerous rogue scientist doesn't destroy the future of our entire civilization. It was the holy grail of scientific technology. Some said that it could never be achieved, but military scientists have finally mastered the fine art of time travel. But Dr. Daniel Winter (Lou Diamond Phillips) doesn't trust the military with such dangerous technology, and when he steals it, Special Agent Caleb Smith (Jason Priestly) is assigned the task of tracking him down. When Special Agent Smith comes face to face with the man who now has the ability to alter the course of history, the stage is set for a showdown that will distort the very fabric of time. The stakes are higher than ever before, and should Agent Smith fail, everything he's ever known could simply disappear in the blink of an eye. ~ Jason Buchanan, Rovi

...almost manages to rise above its low-budget DTV origins...

The acting in the movie was good for a B movie plus there were quite a few veteran actors like Lou Diamond Phillips and Jason Priestley, in this movie that still knew how to act. The story was a little ruff but all in all it was definitely watchable. The special effects not bad at all.