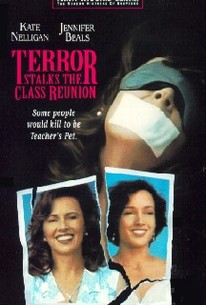 Made for Canadian television, For Better and for Worse was released to America as Terror Stalks the Class Reunion. The general theme and tone of the film is implicit in its title. Kate Nelligan heads the cast as a retired teacher who attends a reunion in Germany. Here she is kidnapped by former student Anton (Geraint Wyn Davies), who nurses a grudge of long, long standing. The film is based on a suspense novel by Mary Higgins Clark. For Better and for Worse was first seen in the U.S. on June 12, 1992.

There are no critic reviews yet for Terror Stalks the Class Reunion. Keep checking Rotten Tomatoes for updates!

There are no featured reviews for Terror Stalks the Class Reunion at this time.