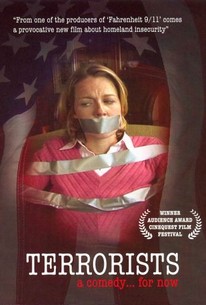 Director Jay Martel parodies the culture of fear so predominate in post-9/11 America in this satire concerning a bored small-town police chief who makes a bumbling attempt to prove his worth in the War on Terror. A series of unrelated events have convinced the overzealous lawman that a terrorist attack on his community is eminent, and when a graduate student of Middle Eastern pedigree arrives in town to verify the existence of the "world's largest stool" he quickly becomes the sheriff's prime suspect. As the community collapses into a panic, the satisfied chief finally begins to experience the perks of his once-thankless job. When he makes the fateful decision to elevate the town's alert level from brick to tangerine, however, an already tense situation becomes an outright fiasco.

There are no critic reviews yet for Terrorists. Keep checking Rotten Tomatoes for updates!

There are no featured audience reviews yet. Click the link below to see what others say about Terrorists!