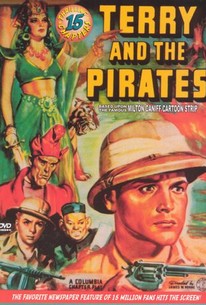 Best remembered today as the upwardly mobile errand boy in Ernst Lubitsch's The Shop Around the Corner (1940), busy juvenile actor William Tracy starred in the title-role of this popular action serial that very same year. Released in fifteen chapters by Columbia Pictures, Terry of the Pirates told of how young Terry Lee goes in search of his father (J. Paul Jones, who has vanished in the Asian jungles. Dr. Lee, it turns out, was kidnapped by the jungle pirates of Fang (Dick Curtis), a local warlord attempting to solve the secret of the Temple of Mara. Attacked by Fang, his henchman Stanton (Jack Ingram) and an army of Tiger Men, Terry and his friends, Pat Ryan (Granville Owens, Normandie Drake (Joyce Bryant and the beautiful Dragon Lady (Sheila Darcy), manage not only to locate the missing Dr. Lee but also the hidden treasure of Mara. Based on the 1934 comic strip by Milton Caniff, Terry and the Pirates was turned into a television series in 1952, this time with John Baer as Terry and William Tracy as comic relief character Hot Shot Charlie.

Critic Reviews for Terry and the Pirates

There are no critic reviews yet for Terry and the Pirates. Keep checking Rotten Tomatoes for updates!

There are no featured reviews for Terry and the Pirates at this time.

Terry and the Pirates Quotes