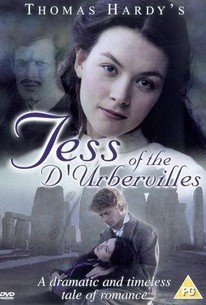 Tess of the D'Urbervilles Photos

Thomas Hardy's classic 19th century novel Tess of the d'Ubervilles was expansively adapted to television in this two-part British miniseries. Justine Waddell stars as Tess D'Urbeyfield, the poor relation to the prosperous D'Ubervilles, a rural family. Sent to work on the farm of her distant relatives, Tess stirs up an intense romantic rivalry between her cousin Alec D'Uberville (Jason Flemyng) and handsome "local" Angel Clare (Oliver Milburn). Tragedy ensues when the rapacious Alec "has his way" with Tess, inaugurating a chain of events that will ultimately find the heroine on trial for her life. A production of ITV's London Weekend Television, Tess of the d'Ubervilles was originally presented in one two-hour and one 90-minute installment beginning March 8, 1998. The program debuted in America on September 13 of that same year. ~ Hal Erickson, Rovi

Critic Reviews for Tess of the D'Urbervilles

Jan Sharp directs Tess and expertly draws out the emotional firepower in its exploration of forgiveness, fate, and suffering.

Audience Reviews for Tess of the D'Urbervilles

Tess of the D'Urbervilles Quotes