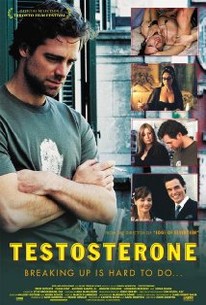 Plagued by memories of his mysteriously departed boyfriend, a man travels all the way to Argentina for some closure in this comedic thriller. TV's David Sutcliffe plays Dean, a comic book artist living in relative comfort in Los Angeles, until an accidental fire destroys his domicile. With no place to live and an egregious case of writer's block, Dean decides to flee the States for South America, where his former lover Pablo (Antonio Sabato Jr.) has retreated without an explanation. Tracking down Pablo's aristocratic mother (Sonia Braga) only brings the attention of the police; Dean has better luck with Pablo's enigmatic neighbor Sofia (Celina Font) and her loose-cannon brother, although even they aren't what they seem. Testosterone co-stars Jennifer Coolidge as Dean's brassy editor.

McCaleb Burnett
as Guy in Turtleneck

There are no critic reviews yet for Testosterone. Keep checking Rotten Tomatoes for updates!

There are no featured reviews for Testosterone at this time.