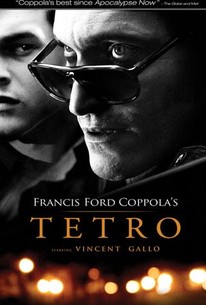 Susana Giménez
as Herself

Pochi Ducasse
as Lili
View All

Watching Tetro, Coppola's first original screenplay in some 30 years, is like eavesdropping on someone's dream.

Coppola excels at what might be termed the cinema of inadequacy.

There is not enough dramatic tension to sustain the film for two hours and conjectures about the Coppola family saga are really extraneous to the experience of Tetro.

Unabashedly theatrical and richly cinematic, even when it's falling apart...

The way ahead could be for Coppola père et fils to stay away from personal themes. Family isn't everything.

Frustrating and fitfully compelling, Tetro may not be a return to former glories, but this is Coppola through and through, an over-ambitious effort about thwarted ambition, full of ideas and passion, and smitten with cinema.

The strength of TETRO- an imperfect film to be sure, but an admirable one - is that the movie is so recognizably from Francis Ford Coppola while nevertheless feeling new and even unrecognizable.

More than gets by on the strength of Coppola's ability to construct a visually arresting and compelling film even when the story and the dialogue border on uninteresting.

Francis Ford Coppola shows here that he can, now in his 70s, make a movie with the same kind of youthful spirit of his past, but with the control and patience of a veteran filmmaker

Deeply personal yet utterly accessible, and with moments of laugh out loud humour mixed in with the Tennessee Williams-esque tension, Tetro is romanticism, comedy and drama wrapped up in one utterly sublime package.

It's wonderful to see Mr. Coppola working from his own material again, although the results are uneven.

A welcome return to some kind of form for the bearded behemoth.

How incredibly frustrating it is to see a movie so compelling, wonderfully directed, technically exemplary and with a gorgeous cinematography go into self-destruction mode in the last thirty minutes, when it gives in to predictable revelations and silly situations worthy of a lame soap opera.

Carlo: What has happened to our family?  Bennie: Rivalry.  "Every family has a past." Tetro is a beautifully shot and acted film. It is filmed in black and white against, with Argentina as a setting. The career of Francis Ford Coppola is filled with masterpieces and a couple disasters, most notably Jack. Tetro is in-between. It is incredibly well made, but comes off as a little overly artsy at times. I enjoyed it, but I can see it being a little off-putting.  The story concerns two brothers. Bennie is the youngest, and is sensitive and emotional. The other is Tetro, who is the oldest and seems mean spirited in the beginning, but as we learn the back story it makes more and more sense. The two brothers haven't seen each other in a decade, when Bennie shows up at Tetro's apartment. Tetro had left for a writing sabbatical, leaving a note for Bennie, saying he would come back and get him. That never happened and Bennie is hurt by it. He just wants to be close to his brother, but Tetro left the family a long time ago. They strike up some sort of relationship as we slowly piece together the family's story. It all leads to a plot, I don't want to say twist, but sharp right turn would work. Everything about the movie is beautiful. The scenery, the cinematography, the performances from Vincent Gallo, Alden Ehenreich, and Maribel Verdú, and of course Coppola's signature touch. The only real problem I have with the movie is there's about a twenty to thirty minute period in the middle that just dragged. But the beginning and ending are great. What you need to know about the movie is that it is extremely slow and relies much more on character, over plot. It could easily come off as boring, but it is always marvelous to look at. Plus Vincent Gallo always keeps the viewer interested.

When is this fucking picture supposed to take place? 1970's? 1940's? now? judging by Vincent's outfits, it should be 1979, except he dresses like that everyday on and off the sets of movies. i think his mother brought him home from the hospital with women's bell-bottoms and red boots on. its pretty funny to watch him in 90% of his scenes with an unlit cigarette in his mouth and it just sits there like a funny hat. he moves it around with his teeth, takes it in and out between words, and the few times you see him light it, no smoke comes out of his mouth. so i think he's trying some of those new toothpicks that are designed to look like cigarettes. he doesn't smoke in real life. as a Vincenzo obsessor, i can say this is one of his best works in terms of just being an italian prick. this is also apparently the first film he had rehearsed for, which shows because you can see the prickiness in his eyes in every shot. and when he lights his cigarettes and doesn't even take the energy to inhale, you can just tell he fucking hates people really hard. Vincent Gallo mumbles the word "asshole" in his sleep.