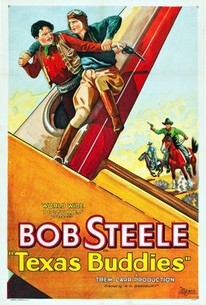 Diminutive cowboy star Bob Steele took to the air in this his second-to-last Western for poverty row company Sono Art-World Wide. A returning World War I flying ace, Ted "Gat" Garner (Steele) joins his old friend Si Halter (George "Gabby" Hayes) on a trip to the desert. They stumble over the skeletal remains of Cyrus Hellner and a note that begs the finder to care for Hellner's niece June Collins. The girl (Nancy Drexel) arrives in a bi-plane that is shot down by highwayman Kincaid (Harry Semels) and his cohorts, Blake (Francis McDonald) and Burns (Dick Dickinson). The villains are chased away by "Gat" and Si, the latter pretending to be June's uncle to spare her more grief. Along with the sheriff (William J. Dyer), "Gat" and Si then concoct a scheme to lure Kincaid out into the open but the villain, who not only murdered Cyrus Hellner but also stole "Gat's" prize horse, doesn't fall for the trick. He is eventually betrayed by his henchman Burns, however, and apprehended after a final climactic chase.

There are no critic reviews yet for Texas Buddies. Keep checking Rotten Tomatoes for updates!

There are no featured reviews for Texas Buddies at this time.