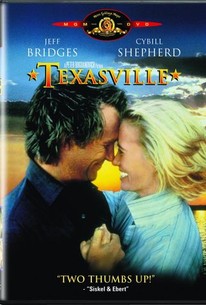 Critics Consensus: An impressive array of talent on either side of the camera helps compensate for Texasville's inability to live up to its classic predecessor, but it isn't quite enough.

Critics Consensus: An impressive array of talent on either side of the camera helps compensate for Texasville's inability to live up to its classic predecessor, but it isn't quite enough.

Critic Consensus: An impressive array of talent on either side of the camera helps compensate for Texasville's inability to live up to its classic predecessor, but it isn't quite enough.

Texasville is Peter Bogdanovich's much-delayed sequel to The Last Picture Show. Adapted from Larry McMurtry's novel and told as a series of episodes, Texasville follows the characters from The Last Picture Show as they reunite in a small Texas town nearly 30 years after the end of the last movie, and face a number of adult problems, as well as confronting lingering emotions and memories from adolescence.

It all looks good, though, and the actors - epecially Bridges and Potts - are clearly having a ball.

comes off like an exceptionally slow episode of Dallas.

This is purty near the worst movie of the whole year.

It is, in a sense, like a high school reunion, taking people we last saw in 1951 and continuing their histories in the early 1980s.

The Last Picture Show is a stark and hypnotic portrait of a West Texas town in its final death throes, a lyrical and touching film about friendship and love and sex. Texasville is about nothing.

Bittersweet drama about the different changes in middle-age for men and women.

Fairly lukewarm sequel to an American classic. Has its moments, but not enough of them.

must have seemed like a good idea at the time. But the result is muddled at best.

Honestly, this the most bizarre sequel to The Last Picture Show. It's actually just as good, but completely different in story, visuals and mood. This is a complete black comedy as opposed to the fairly serious approach to the original. The characters have seemed to all lost their minds except for Jeff Bridges' Duane, who is slowly being worn down by his chaotic life that was never wanted by him in the first place. The main theme is about middle age and living with regret, but just as much about the effect of the 80s on a small town. I think it's actually a good thing that this isn't just more of the same. Peter Bogdonavich seemed to really want to make a separate and unique movie instead of a sequel. The performances are still great and the writing is clever, which is all you can ask for.

While "Texasville" is a sequel to Bogdanovich's classic "The Last Picture Show", they are very different movies. While "The Last Picture Show" is a dark portrait of the sexual morals in the 50s, "Texasville" a colorful portrait of sexual ambivalence in the Reagan 80s. All the actors are clearly having a blast reprising their iconic roles and Bogdanovich's deft balance of drama and comedy is masterful. "Texasville" works as a sequel and also as a standalone film of love lost, middle age concerns and dealing with the sheer lunacy that life always throws your way. "Texasville" is a long forgotten gem.

While Last Picture Show was clearly Sonny's story, Texasville decides to relegate him to the background (Timothy Bottoms not being the draw he once was, apparently) and focuses instead on Duane and Jacey -- whose story clearly ended all those years ago, as it certainly doesn't go anywhere here. Almost everyone returns for this sequel, which is kind of sad, when you think about it. Cloris Leachman and Eileen Brennan reprise their roles, but they needn't have done, as the characters have nothing to do with the story (such as it is). And Randy Quaid is at his most annoying, playing a variation on his Cousin Eddie character. No, I could have done without this one altogether.