Thank You for Smoking2006 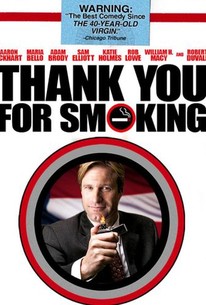 Critics Consensus: Loaded with delightfully unscrupulous characters and and a witty, cynical script, Thank You For Smoking is a sharp satire with a brilliantly smarmy lead performance from Aaron Eckhart.

Critics Consensus: Loaded with delightfully unscrupulous characters and and a witty, cynical script, Thank You For Smoking is a sharp satire with a brilliantly smarmy lead performance from Aaron Eckhart.

Critic Consensus: Loaded with delightfully unscrupulous characters and and a witty, cynical script, Thank You For Smoking is a sharp satire with a brilliantly smarmy lead performance from Aaron Eckhart.

Thank You for Smoking Photos

Nick Naylor, chief spokesman for Big Tobacco, makes his living defending the rights of smokers and cigarette makers in today's neo-puritanical culture. Confronted by health zealots out to ban tobacco and an opportunistic senator who wants to put poison labels on cigarette packs, Nick goes on a PR offensive, spinning away the dangers of cigarettes on TV talk shows and enlisting a Hollywood super-agent to promote smoking in movies. Nick's newfound notoriety attracts the attention of both tobacco's head honcho and an investigative reporter for an influential Washington daily. Nick says he is just doing what it takes to pay the mortgage, but the increased scrutiny of his son and a very real death threat may force him to think differently.

Joan Lunden
as Herself

Dennis Miller
as Himself

Jordan Garrett
as Kid No. 2

Courtney Taylor Burness
as Kid No. 3

Terry James
as Ski Mask No. 1

Marc Scizak
as Ski Mask No. 2

Nancy O'Dell
as Herself

News & Interviews for Thank You for Smoking

View All Thank You for Smoking News

Critic Reviews for Thank You for Smoking

The picture is obviously a satire, but it has no sharpness, no sense of daring.

There's enough bite in the dialogue and performances to provoke a hacking cough of approval, and the laugh-out-loud moments are many, not least in scenes featuring Rob Lowe's unctuous Hollywood agent.

Aiming at all targets and hitting none of them, the movie is as harmless and inconsequential as a candy cigarette.

Structural scrappiness aside, it remains a laudably amoral and superbly caustic comedy for those who like their satire strong and unfiltered.

As a clear-eyed dissection of the dirty business of public relations, where "if you argue correctly, you're never wrong", it is pretty much peerless.

Even the good lines here last a self-congratulatory beat too long.

A razor-sharp satire that's smart and funny and features a great performance by Aaron Eckhart.

Thank You For Smoking gets much of its juice from a superb Aaron Eckhart as Nick Naylor.

Thank You For Smoking is an elegant satire, sneaky and subtle...

Audience Reviews for Thank You for Smoking

With a solid performance from Aaron Eckhart and offering us a deliciously clever commentary on rhetoric, Reitman's debut is an enjoyable satire - even though it must have looked real nice on paper but doesn't really work that well on the screen (especially its sense of humor).

Nick Naylor is possibly the most hated man in America; his job is basically to peddle poison to children. But it pays the mortgage...This extremely clever and insightful satire of today's climate of political spin is incredibly sharply written and has lots of laugh out loud moments as it deconstructs the methods used by PR men in the 21st century; even the "good guys" do not emerge unscathed as they are shown to use exactly the same tactics (see the hilarious scene when William H. Macy bemoans the quality of his TV "cancer kid"!). It may not have the flash and bangs of Lord Of War, but it has far more depth; in fact it reminded me more of an updated version of American Psycho. Instead of the hands on greed of the 80s satirised in that film, it shows how the immoral earn their corporate cash through hypocrisy and double talk these days rather than getting their "hands dirty". I couldn't help feeling that Jason Reitman got more carried away with making a political point and smart dialogue than dramatic momentum and so the plot lacked focus, but the cast are all superb and it contains witty and stylish visual and voice over cues in a similar vein to Fight Club and a great soundtrack. Very funny, very clever.

Cleaver Thats the best way to describe this movie and the way Aaron Eckhart acts throughout the whole movie. Enjoy!

Lying's not murder, is it ... and that's the popular wisdom, a thought that guides many existences, but in this flush comedy the lead proclaims, no, sneers that Genghis Khan's got nothing on him as he's the charming and suave mouthpiece for big tobacco. A quick, smart script and smooth direction round out this very enjoyable visit to the darkest of dark sides while admitting, with a smile, no wrongdoing.

Thank You for Smoking Quotes