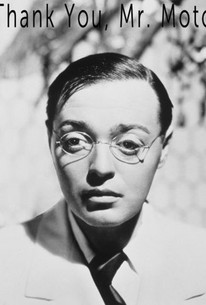 The second of eight 1930s films based on J. P. Marquand's Japanese detective, Thank You, Mr. Moto finds Moto (Peter Lorre) coming to the aid of Chinese royalty. The last remaining members of an ancient Chinese clan (Pauline Frederick and Philip Ahn) have in their possession six of seven scrolls, which when put together reveal the secret hiding place of Genghis Kahn's treasure. Moto has the seventh scroll, which he sneaks into Peking in hopes of contacting the family. The villains torture and kill the Chinese royals, then lure Moto to a rendezvous on a Chinese river junk. Moto is aided in thwarting the villains by the quick thinking of ingenue Jayne Regan; then, rather than risk the scrolls falling into the wrong hands and thus disgracing the Chinese family who died for their sake, Moto burns all seven parchments.

James B. Leong
as Officer
View All

What it has going for it in jade, is the sly and quirky performance by Peter Lorre.

There are no featured reviews for Thank You, Mr. Moto at this time.