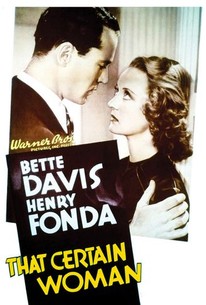 Edmund Goulding directed this remake of his own 1929 The Trespasser, which starred Gloria Swanson. Here Bette Davis assumes the lead role of Mary Donnell, a young innocent married to a bootlegger. When her husband is killed, she decides to pursue a better life and gets a job as a secretary to attorney Lloyd Rogers (Ian Hunter). Lloyd falls in love with Mary but stoically keeps his feelings hidden from her. One of Lloyd's clients is the millionaire Merrick (Donald Crisp), whose playboy son Jack (Henry Fonda) falls in love with Mary. The two elope and take off on their honeymoon, but Merrick, who feels that Mary is not good enough for Jack, asks that the marriage be annulled. Jack reluctantly agrees and Mary goes back to her old job with Lloyd. But Mary finds that she is pregnant and has a baby boy. She swears Lloyd to secrecy concerning her child and Lloyd agrees. Meanwhile, Jack marries a woman of his own class, Flip (Anita Louise), but she is fatally injured in an automobile accident. Lloyd also falls ill and dies at Mary's feet --but not before confessing his love for Mary. When his will is read, it reveals that he has left Mary and her child a vast fortune. Lloyd's wife (Katherine Alexander) believes the baby boy is Lloyd's illegitimate child, and she tries to overturn the terms of the will. Jack hears about Mary's child, and she confesses that the child is actually his. Merrick then tries to have the baby taken away from Mary, contending that she is unfit to raise the baby. Unable to withstand Merrick's legal hammering, Mary offers the child to Jack and Flip. Mary, distraught after abandoning her baby, leaves on a European trip. While she is gone, Flip dies and Jack leaves for Europe to try to find her.

Andre Cheron
as Concierge
View All

Critic Reviews for That Certain Woman

It's rather an old story, but Bette Davis' high-tension performance gives it a certain vitality.

If you like the pic, it's clearly because of Bette Davis.

Audience Reviews for That Certain Woman

Standard weepie elevated by Bette and Henry. Anita Louise steals her one scene with some of the best acting she ever did.

That Certain Woman starring my all time favorite Bette Davis from 1937 is a good Warner Bros film. This film teams Henry Fonda alongside Bette Davis as a couple whom face many obsticles. She has a passed with a man on the wrong side of the law and is not allowed to move on from it. Check this out film buffs!!!