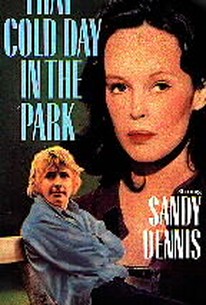 A spinster goes to extraordinary lengths to assuage her loneliness in Robert Altman's 1969 drama. Wealthy Frances Austen (Sandy Dennis) conducts herself as if she were older than she actually is, but when she spies a blond youth (Michael Burns) sitting alone in a rain-swept Vancouver park, she takes him to her apartment. Apparently mute, the boy accepts Frances's ministrations, content to have a bed of his own and to listen to her talk, even if he has to come and go through his window after she locks his bedroom door at night. But when he leaves his bed empty on the night that Frances attempts to seduce him, the boy soon learns who is in control of their relationship and how far Frances will go to keep it that way. This film began Altman's 1970s effort to experiment with established movie genres: in this case, the Gothic thriller. Making the most of Frances's creepy apartment, cinematographer Laszlo Kovacs zooms in to symbolic details of Frances's life and zooms out to reveal her unnerving isolation in her own space. Altman maintains an awareness of the world outside Frances and the boy through mobile visuals and snippets of other conversations whenever either is in public, signaling the emphasis on the periphery that marked his future films, while underlining Frances's and the boy's estrangement from "normal" life. Too odd, distant and, well, cold, That Cold Day in the Park flopped. Producer Ingo Preminger claimed that if he had seen That Cold Day in the Park, he never would have hired Altman to direct his next film: the 1970 smash hit MASH. ~ Lucia Bozzola, Rovi

Michael Murphy
as The mediator

Linda Sorenson
as The prostitute
View All

Critic Reviews for That Cold Day in the Park

the psychodrama that emerges shows a woman lost in the cracks between the staid bourgeois respectability of her mother's generation, and the new freedoms of the '60s.

It's a cold, ugly and meandering business.

The plot is too improbable to be taken seriously, and yet director Robert Altman apparently does take it seriously.

Robert Altman's inauspicious first theatrical feature -- recognizably his work, meandering zooms and all, but the material is somewhat pretentious and hackneyed.

Full of the drifting long shots, slow zooms, and overlapping dialogue that would help to characterise Altman's later masterpieces.

Audience Reviews for That Cold Day in the Park

An irregular psychological drama that is well made in some aspects (especially the cinematography and editing) but not so successful in its direction, as it fails to engage and create the impact that one would expect from this story of deranged loneliness and manipulation.

"That Cold Day in the Park" is historically interesting as one of director Robert Altman's earliest films, but its main virtues are the story and Sandy Dennis' complex performance. Dennis enters the film in her usual insecure, whiny guise playing Francis, a lonely woman who has aged beyond her years. She has a nice, inherited apartment but mostly knows older people and has few friends. One rain-soaked day, she spots a handsome guy (Michael Burns) shivering on a park bench below her window. After he lingers there for hours, she assumes he is homeless and generously calls him inside for a bath and meal. He turns out to be mute, which only adds to his pitiable traits. She invites him to temporarily stay in her extra room. Further details shouldn't be revealed, but this initially sweet friendship darkens into a psychological duel in which we wonder whom to side with: Francis, who exploits her new roommate for companionship, or the unnamed lad, who exploits Francis for food and lodging. "That Cold Day in the Park" has some dull patches, but its climax is worth the wait. Dennis carries about 80% of the film and arguably deserved an Oscar nomination. As for the Altman factor, the primary glimpses of his burgeoning style are a small part for Michael Murphy (who appeared in several later Altman projects) and, more importantly, some incidental experimentation with overlapping dialogue. The most notable example occurs in a gynecologist's waiting room -- which itself might foreshadow 2000's "Dr. T and the Women."

That Cold Day in the Park Quotes