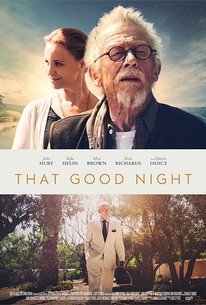 Ralph, a once famous writer is in his seventies and terminally ill. He has things to do before he dies: to be reconciled with his long-abandoned son, Michael, and secretly, to ensure he is not a burden to his devoted young wife, Anna, as he goes 'into that good night.' But Ralph ruins all hope of reconciliation when he picks a fight with Michael's girlfriend, Cassie. Later, alone, Ralph receives the sinister and mysterious "Visitor" whose services he has hired to provide a painless ending to his life. But the Visitor plays a devastating trick. Ralph 'wakes up' to face the damaged potential that life still holds for him and with his second chance he has a short window of opportunity to right some wrongs.

Critic Reviews for That Good Night

....this is a lovely and old-fashioned character study with some sly humor and, of course, more than a couple of reach-for-the-tissues moments.

The beauty of Hurt's complex performance is the helplessness in his eyes as his mouth spews its poisonous cruelty - he's a hostage to what used to be wit but now just feels like petty spite.

The human interaction, alas, remains hidebound: it's another of those scripts about a writer where the protagonist has been developed at everybody else's expense.

It's more mawkish than melancholic.

Given the maudlin quality of the storyline, the filmmakers surely didn't need to include such a syrupy soundtrack.

It's a bit of a stiff, this ex-stage play transposed to a sunny villa somewhere in art movie land. But Sir John isn't: he's the life of the party and definitely its soul.

That Good Night plays everything far too safe ... for it to be considered anything more than forgettable fluff

Performances aside, Eric Styles' creaky, sentimental film is mainly of morbid interest. Hurt does well here, but this is not what we should remember him by.

It's heartfelt, sensitively told, and stays more realistic than melodramatic.

Hurt and Dance share a wonderful rapport and one can't help but wish That Good Night had been a two-hander.

The film never feels truly worthy of Hurt's talents and doesn't utilise his abilities as well as it could have done.

There are no featured reviews for That Good Night at this time.