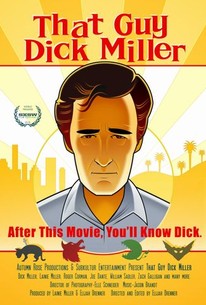 You know the face, and have heard the voice, but just can't figure out where. The character actor's character actor, Dick Miller is nothing short of a living legend to those who delight in his every bit role, in a career that to date encompasses more than 175 feature films and over 2,000 television appearances. The new documentary, THAT GUY DICK MILLER, performs the Nobel-Award-worthy public service of shining a spotlight on this national treasure, one of the most reliably inspired and omnipresent actors of the past 50-plus years. (C) Anthology Archives

[It] feels scattered and less than the sum of Mr. Miller's many parts. But it has its heart in the right movie-mad place.

While That Guy Dick Miller plays a lot like an extended (and overlong) DVD extra, the subject is so likable that the movie as a whole is fairly pleasant.

At 90-odd minutes, it's more exhausting than illuminating -- there's not much time for anything resembling proper analysis.

A fawning tribute to the cult legend, enriched by a subtle current of sadness that prevents the documentary from turning into a glorified DVD supplement.

Drenner makes a persuasive argument that Miller is a far better actor than he's ever been given credit for.

That Guy is just a ton of fun. The clips alone deliver a wildly eccentric nostalgia trip. Plus, there is something rather inspiring about Miller's resiliency.

It's clear that That Guy Dick Miller needs more Dick, but fans of the man will find enough here to justify the time investment.

This is an unabashed celebration of Dick Miller, the veteran character actor whose filmography reads like the history of American genre cinema.

If you've ever noticed Dick Miller in a movie and thought, "Hey, I recognize that actor!", you'll find this look at his amazing body of work both engaging and entertaining.

There are no featured audience reviews yet. Click the link below to see what others say about That Guy Dick Miller!