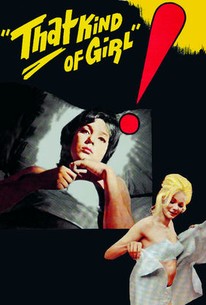 Purporting to warn young people of premarital sex, this British drama is exploitation with a capital 'E.' Set in a conservative peaceful village, the drama begins with the arrival of a sexy Austrian girl who proceeds to seduce every man in sight. One of her victims is engaged. When his fiancee finds out, she has an insecurity attack and lets her beloved have sex with her. This results in pregnancy. Later the Austrian hussy gets raped by her steady because he is jealous of her other trysts. To top it off, she ends up contracting a dreaded venereal disease. Naturally all of those who sampled her ample wares get into quite a tizzy. ~ Sandra Brennan, Rovi

Patricia Mort
as Barbara
View All

Critic Reviews for That Kind of Girl

There are no critic reviews yet for That Kind of Girl. Keep checking Rotten Tomatoes for updates!

There are no featured reviews for That Kind of Girl at this time.

That Kind of Girl Quotes