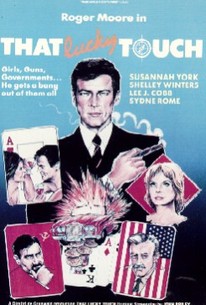 Lee J. Cobb's last film is in this light romantic comedy starring Roger Moore as Michael Scott, an arms dealer who comes complete with a sophisticated playboy patter for the ladies. During war games, Michael attempts to sell weapons to NATO forces by trying to interest NATO general Steedman (Lee J. Cobb) in his wares. Opposing his sale is feminist reporter Julia Richardson (Susannah York), who is not impressed with either his job or his come-hither endearments. But, as happens to most movie feminists, she ends up putting her values on the back burner and she falls in love with Michael.

Donna Todd
as Neighbor
View All

Critic Reviews for That Lucky Touch

There are no critic reviews yet for That Lucky Touch. Keep checking Rotten Tomatoes for updates!

There are no featured reviews for That Lucky Touch at this time.