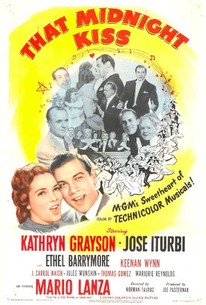 That Midnight Kiss served to introduce the film-going public to MGM's newest singing sensation, Mario Lanza. Just as he did with Deanna Durbin at Universal, producer Joe Pasternak removes the "stuffy" onus attached to classical music by presenting Lanza as a down-to-earth truck driver named Johnny Donetti. When it turns out that Johnny has a splendid singing voice, he gets a minor job at the Philadelphia opera company sponsored by aristocratic Abigail Trent Budell (Ethel Barrymore). Abigail's granddaughter Prudence (Kathryn Grayson) is instrumental in bringing Johnny to public attention by insisting that he replace the opera troupe's defecting star tenor. Featured in the cast are Keenan Wynn as Lanza's best pal, J. Carroll Naish as his "Whatsa matta you?" Italian father, and MGM's resident musical genius Jose Iturbi as himself. That Midnight Kiss served its purpose by transforming the relatively unknown Mario Lanza into a box-office champion.

Jose Iturbi
as Himself

Amparo Iturbi
as Herself

Sheila Stein
as Peanuts
View All

Critic Reviews for That Midnight Kiss

Features young budding opera star tenor Mario Lanza in his film debut. The handsome lad proves he can sing, but falls short in the acting.

Audience Reviews for That Midnight Kiss

There are no featured audience reviews yet. Click the link below to see what others say about That Midnight Kiss!