That Obscure Object of Desire1977 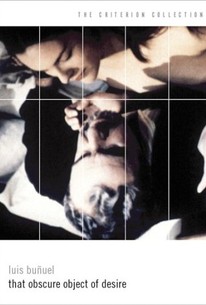 Critics Consensus: That Obscure Object of Desire is a frequently unsettling treatise on the quixotic nature of lust and love.

Critics Consensus: That Obscure Object of Desire is a frequently unsettling treatise on the quixotic nature of lust and love.

Critic Consensus: That Obscure Object of Desire is a frequently unsettling treatise on the quixotic nature of lust and love.

That Obscure Object of Desire Photos

Iconoclastic Spanish filmmaker Luis Bunuel bade "adios" to admirers and detractors alike with 1977's That Obscure Object of Desire (Cet Obscur Objet du Desir) is no less challenging and outrageous than the director's earlier films. Bunuel "regular" Fernando Rey plays a wealthy, obsessive S&M freak who falls in love with a beautiful Spanish maiden, played in some scenes by Carole Bouquet, in others by Angela Molina (Why two actresses? Bunuel never explains). Arranging to hire the girl as a maid, Rey becomes her willing emotional slave, enduring her insistence upon withholding sex from him while she parades around with a younger lover. No matter how badly the girl treats Rey (she protests that she loves him, even as she habitually walks out on him) he is willing to follow her to the ends of the earth--or at least to the out-of-nowhere terrorist bombing that climaxes this film. That Obscure Object of Desire was based on Pierre Louys' novel The Woman and the Puppet, previously filmed in 1929, 1935 (as Josef Von Sternberg's The Devil is a Woman) and 1960.

Auguste Carriere
as Woman in Showcase

Jean-Claude Montalban
as Waiter in Bar

Critic Reviews for That Obscure Object of Desire

[Bunuel's] film is filled with small, droll touches, with tiny peculiarities of behavior, with moral anarchy, with a cynicism about human nature that somehow seems, in his hands, almost cheerful.

From Un Chien Andalou to That Obscure Object of Desire, Luis Buñuel spent almost 50 years cataloging the frustrated romantic desires of his characters.

With an effortlessness matched by no other director today, Buñuel creates a vision of a world as logical as a theorem, as mysterious as a dream, and as funny as a vaudeville gag.

One of the director's later works, That Obscure Object of Desire, examines the puzzle of sexual politics.

If this sounds rather conventional for Buñuel, be aware that the role of the temptress is played by not one but two actresses.

Luis Buñuel's final film is regarded as a masterpiece but disappoints as shallow, vaguely sexist look at a cursed romance between a rich old Frenchman and a teen tease played by two different actresses.

This is a cheerful, brilliant, contemporary, and fun story that if it weren't for the director's name, one could say it was made by a young person, considering its newness. [Full Review in Spanish]

Buñuel...offers neither nostalgia nor wisdom, but an engaging practical example of the art of accepting defeat without learning to expect it.

I could watch Fernando Rey squirm for hours, so amusing are the aristocratically clownish expressions on his face.

[Bunuel] remains as brilliantly in control of his own emotions as he does of the process of making the film.

Buñuel finenesses the unrequited love between his characters with such a command of cinematic spontaneity and humanity that you could watch it a hundred times. Genius.

Audience Reviews for That Obscure Object of Desire

A rich old man (Fernando Rey) courts 18-year old Conchita (who, with no explanation, is played by two different actresses) over the years, but she seems to be toying with him, and he never achieves the object of his desire. In Bunuel's previous THE DISCREET CHARM OF THE BOURGEOISIE (1972) the attendees at a dinner party could never eat because of continual interruptions; in this droll comedy, Rey can never... you know.

Now this is a lot of fun. Luis Bunuel's final film, "That Obscure Object of Desire" charts the relevant yet rocky terrain of passion vs. obsession and love vs. absurdity. Bunuel does some really intriguing things with casting, cross cutting stories and the actors have fun with their wacky and juxtapositional dialogue. I love movies about 'emotional terrorism' and this is one of the earlier films to probe the theme. It's funny, timely (even though it was released in 1977) and intriguing.

Luis Buñuel's swan song is as delightful, vigorous, loudly cynic, rich and subversive as his other grand works. Fernando Rey, Carole Bouquet and Angela Molina are simply wonderful. masterpiece of imagery and eroticism.

That Obscure Object of Desire Quotes