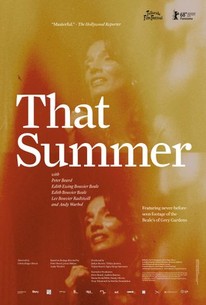 Critics Consensus: Although likely most satisfying for Grey Gardens fans, That Summer adds a slight yet entertaining addendum to its classic predecessor.

Critics Consensus: Although likely most satisfying for Grey Gardens fans, That Summer adds a slight yet entertaining addendum to its classic predecessor.

Critic Consensus: Although likely most satisfying for Grey Gardens fans, That Summer adds a slight yet entertaining addendum to its classic predecessor.

Welcome to Grey Gardens...as you've never seen it before. Three years before the Maysles' landmark documentary introduced the world to Edith and Edie Beale - the unforgettable mother-daughter (and Jackie O. relatives) living in a daycare dream world on Long Island - renowned photographer Peter Beard chronicled life at their crumbling estate during one summer in 1972. For the first time ever, director Goran Olsson (The black Power Mixtape 1967 - 1975) assembles this long-lost footage - featuring glimpses of luminaries like Andy Warhol, Mick Jagger, and Truman Capote - into a one-of-a-kind family portrait bursting with the loving squabbles, quotable bon mots, and impromptu musical numbers that would make Big and Little Edie beloved cultural icons.

Bianca Jagger
as Herself

Jade Jagger
as Herself

Edith Bouvier Beale
as Herself

Critic Reviews for That Summer

"That Summer" leaves me with Beale fatigue. It would seem to appeal to "Grey Gardens" completists only.

At just 80 minutes, That Summer is probably one for enthusiasts only, but existing fans will find plenty to savour.

Its value lies less in its resurrection of footage long thought vanished than in the way that it has been co-opted, with remarkably little overt editorial interference, into an essay on the impermanence, persistence and importance of memory.

Olsson's approach to the footage mirrors that of the compulsive-hoarder subjects: keep everything, discard nothing. There's some treasure in there somewhere.

A tribute to the spirited ones.

Viewers don't need to have seen Grey Gardens to appreciate this picture, but after seeing it they'll most likely want to spend more time with the Beales.

Heavy as it may sound, That Summer is mostly a fun 80 minutes spent in the company of charming characters.

That Summer is more a well-edited curiosity than a fully realized documentary, but in this case, it works because the subjects are so captivating and bizarre.

As a "prequel" look at the Beales, That Summer makes for a fascinating contrast between the icons they have been turned into and the people they were before then.

With an eye on challenging or differently interpreting a modern American legend, That Summer could have been superlative. Instead, it just feels superfluous.

Those who can't get enough of the Beales are likely to feel as if they've discovered a long-lost family photo album.

There are no featured reviews for That Summer at this time.