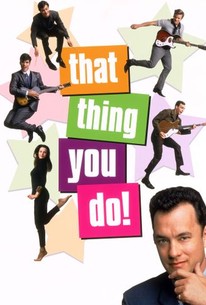 Critics Consensus: A light, sweet, and thoroughly entertaining debut for director Tom Hanks, That Thing You Do! makes up in charm what it lacks in complexity.

Critics Consensus: A light, sweet, and thoroughly entertaining debut for director Tom Hanks, That Thing You Do! makes up in charm what it lacks in complexity.

Critic Consensus: A light, sweet, and thoroughly entertaining debut for director Tom Hanks, That Thing You Do! makes up in charm what it lacks in complexity.

That Thing You Do! Photos

Tom Hanks made his directorial debut in this bright comedy set in the mid-1960's about a rock group and their brief fling with fame. Guy Patterson (Tom Everett Scott) works as a salesman at his father's appliance store and plays the drums in his spare time, fancying himself a jazz musician. One day, a buddy of Guy's tells him a local rock band, The One-Ders (it's pronounced "wonders"), are in need of a drummer -- they have Battle of the Bands coming up and their usual timekeeper has broken his arm. Guy agrees to sit in, but when it's time to play their best original, a love ballad called "That Thing You Do," Guy lays in a sharp, driving beat that turns the tune into an uptempo pop-rocker. Lead singer Jimmy (Johnathon Schaech) isn't happy at first, but guitarist Lenny (Steve Zahn) and the nameless Bass Player (Ethan Embry) think the song sounds better that way -- and they notice the girls like it just fine. Soon people are actually requesting the song at their shows, and the One-Ders scrape together some money to press a single of "That Thing You Do" to sell between sets. A DJ puts the song on the radio, and opportunity knocks in the form of Mr. White (Tom Hanks), who works for the very major Play-Tone Records label. Play-Tone buys the rights to "That Thing You Do" and puts the band on the road as their song makes it way to the top of the national charts. But what can The Wonders (as Play-Tone have re-named them) do for an encore? And what should Guy do about his infatuation with Jimmy's girlfriend, Faye (Liv Tyler)? Real-life 60's obsessed rocker Chris Isaak has a small part as a recording engineer, and fans of real 60's garage bands will appreciate the wealth of small, accurately observed details (for example, halfway through the film, when a few "That Thing You Do" royalty checks have presumably kicked in, the band's inexpensive Danelectro guitars disappear and the Wonders are suddenly playing on brand new Fender gear -- the height of rock style in 1965). ~ Mark Deming, Rovi

News & Interviews for That Thing You Do!

View All That Thing You Do! News

Critic Reviews for That Thing You Do!

The chief wonder of this rock 'n' roll cast is Tom Everett Scott, whose easy charisma, dreamy smile and undersurface intelligence should shoot him up the acting charts like a bullet.

Though Hanks keeps the satirical and critical aspects of this look at show biz fairly light, there's a lot of conviction and savvy behind the steadiness of his gaze.

First-time writer/director Tom Hanks stays about a half-beat ahead of the cliches with rim shots of boyish enthusiasm and deft comedy. The movie's also buoyed by the title song, whose Beatles sound is infectious enough to merit a real hit.

A sweet, likeable tale of the quick rise to fame and then demise of a small town band. Set in 1964, Hanks' film offers a sanitized, Gump-ish look at a mythical period when boys were boys and girls were girls, with no references to the sex-drug subculture

Sweet nothing, then, but what would you expect of a rock movie devoted to the drummer?

...a persistently entertaining endeavor that's been suffused with a whole host of appealing, captivating elements...

Hanks' fable is still as endearing as it was decades ago. It's a perfect feelgood movie. [Full review in Spanish].

Hanks gives us a rocking musical film for the ages in That Thing You Do!

It's absolutely impossible not to smile when "The Wonders" hear their song on the radio for the first time.

Call it a sanitized version of The Commitments.

Tom Hanks directorial effort is a decent film overall, but nothing that would ever inspire to re-visit again and again with fondness.

Audience Reviews for That Thing You Do!

Do you remember the 60's? The hope, the possibilities, the dreams, the excitement? Do you remember not being anywhere near all of that, only listening to it on the radio, watching it on teevee? Hanks' prepared love letter to those of us in that category involves following the rise and fall of a little garage band that nearly makes it, allowing us to relive our vicarious days of youth. It manages cute, but then that was always its highest goal.

Finger-snapping, head-bopping fun! Tom Everett Scott is effortlessly cool with his ugly-sexy mug, and Liv Tyler is luminous and effervescent. Steve Zahn looks suave and uncharacteristically the most grown up of the bunch. The O-nedders. Hyuk.

That Thing You Do! Quotes