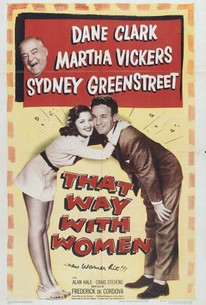 That Way with Women Photos

The 1931 George Arliss vehicle The Millionaire was updated and retailored in 1947 as That Way With Women. Sidney Greenstreet plays the old Arliss role as automobile tycoon James P. Alden, forced into involuntary retirement by his well-meaning wife Minerva (Barbara Brown) and family doctor Harvey (Howard Freeman). Anxious to get his hands grimy with good honest work once more, Alden assumes the identity of family gardener Herman Brinker and takes a grease-jockey job at the corner gas station run by pugnacious Greg Wilson (Dane Clark). It so happens that Wilson, unaware of Alden's true identity, has fallen in love with Alden's snobbish daughter Marcia (Martha Vickers)-and though she won't admit it, she's crazy about Wilson too. The plot thickens when a group of corrupt local-government officials, in league with Marcia's duplicitous fiance Carter Andrews (Craig Stevens), use underhanded methods to force the honest Wilson out of business. As an upshot, the flustered Alden, still posing as Brinker, spends a night in the hoosegow. Eventually everything turns out OK, permitting Sidney Greenstreet to give out with his trademarked gravelly chuckle. More slapstick-oriented than the original The Millionaire (which was based on a story by Earl Derr Biggers, of "Charlie Chan" fame), That Way With Women was perfectly attuned to postwar audience tastes.

Monte Blue
as MacPherson
View All

Critic Reviews for That Way with Women

Audience Reviews for That Way with Women

There are no featured audience reviews yet. Click the link below to see what others say about That Way with Women!

That Way with Women Quotes