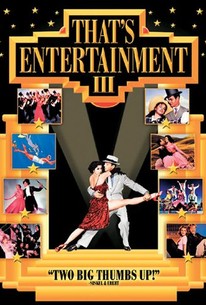 In 1974, MGM Studios released its first compilation of musical highlights from 45 years of Hollywood extravaganzas. Entitled That's Entertainment!, it was a big box-office hit and inspired a second compilation two years later. Eighteen years went by before MGM tried again. The third installment of the series contains a total of 62 musical numbers and includes scenes from more than 100 films. The cavalcade of memories is hosted by nine stars from the old musicals: Gene Kelly, Esther Williams, Debbie Reynolds, Mickey Rooney, Lena Horne, June Allyson, Cyd Charisse, Ann Miller, and Howard Keel. The film is loaded with outtakes and unfinished numbers that didn't make the cut of the original musicals. At many points, there is a split screen, showing the finished product as filmed as well as behind-the-scenes confusion. It's as much a comic "bloopers" TV show as a tribute to the heyday of the musical.

The result is a genuinely fascinating film, one that may tell more about MGM musicals, and aspects of American society, than a film devoted to still more highlights from musical numbers that did make their way into films.

This third installment takes a less reverent and a more behind-the-scenes approach.

who doesn't like singing and dancing when it's done by the best people in the business?

Looking back with haunted nostalgia and sticky sentimentality, this is the third and weakest of the MGM musical anthologies; even so, there are some good numbers with Gene Kelly and the other troupers.

In some ways, it is not a third installment in the That's Entertainment! series as much as it is a parallel history of the MGM musical.

There are no featured audience reviews yet. Click the link below to see what others say about That's Entertainment! III!