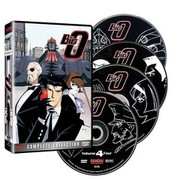 harris a
November 8, 2010
great mashup of noir and mech. Very creative people behind this

Michael M
July 7, 2009
A complex and excellent series. Definately one of my favorite animes.

MR D
½ February 16, 2008
Excelllent series about Negotiator Roger Smith and his Megaduece Robot Called The Big O. Smith has a lot of Bruce Wayne and Batman that shows in the characters design and manerisms.

Hikaru I
½ January 31, 2008
Seen the first four episodes, it's interesting to say the least.

Matt S
January 14, 2008
This interesting show is the strange but great mixture of film noir, "Batman: the Animated Series," and giant robots. How is that not awesome?

R. Dorothy Wainright is an impeccable android, uncertain of her heritage or her future, but has incredible strength on tap, and a tough kind of love for Roger.

Col. Dan Dastun is head of the military police, sworn to uphold the law, to protect those who can't protect themselves, and not let the MPs degenerate into Gestapo style tactics.

Angel is an enigma, playing both sides against the middle-or is it the middle against all sides?

And then there's the Megadeus: The Big O, a Titan in search of a Soul.

These players are all that stands between the amnesiac Paradigm City and the nefarious and corrosive forces of Corporate Fascism, Ultra-literate Hyperaggressive Schwarzwaldian style Mega-regressive Kazsycinskiism, and Post-Evangelion Modernity.

They may not be enough.
They may be too much.

Lucas L
October 29, 2007
One of the most original super robot series I have ever seen.