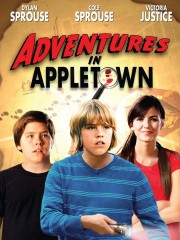 The Kings of Appletown Reviews

John S
October 2, 2016
Watched the movie online, and I loved it. Ali heard it went back into post-production and hasn't been released since. Overall, still a good movie

Kyle M
½ March 13, 2015
Based on a Tom Sawyer story, it'd gotten resurrected with modern storytelling through a form with average offerings within a small scale that's at its own standards, few manageable Hitchcockian elements when it comes to the mystery genre, and enjoying it at a decent level, especially when it stars the Sprouse twins from "The Suite Life" series. (B)

Jon C
July 25, 2013
they actually did a good job with this low-budget mystery thriller for kids
sure it can be a bit extreme and intense when it comes to the supposed-violence and danger Will and Clayton face while solving a murder/treasure case
but the film demands that kind of maturity when two kids see a horrible act being committed and are thrust into the peril
Victoria Justice is just as awesome as the Sprouse brothers but I was bothered that in the 1st half she was barely present, the 2nd half though they gave her more of an actual role to partake in the plot thank goodness, unfortunately the last half of the film they do the same thing they did at the start of the movie
I would have thought being in this cast list as the 3rd protagonist she would have gotten more of a pivotal focus even as a love interest for Will
there were also some minor plotholes that started popping up; the whole sports tryout between Will and Clayton which is only briefly mentioned, the bullies never being confronted entirely, the weak ending on a freeze frame and never going back and never seeing the supposed-romance blossom
the upsides did present themselves a lot more though; the pacing was very fast, the filmmakers didn't waste anytime explaining everything and the picture quality of the film is crisp and sharp
like I said they did do a good job telling this pre-teen treasure hunting story
they didn't make it overly-slick or cool and kept it at its roots
whew

Frances H
June 10, 2013
Just okay kids film. The two leads repeat their lines like they are reading the phone book and have no charm what-so-ever. What led me to watch the movie was that it had Eileen Brennan in it, but her role did not showcase her talents so that was a wash as well. So-so story for kids, but with none of the charm of The Goonies. Nothing for adults here.