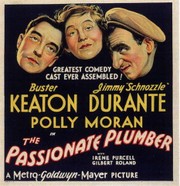 Super Reviewer
Antonius B
½ March 19, 2018
A weak plot, tired gags, and repetitiveness make this certainly one of Keaton's lesser efforts. It is amusing to see him running around (as it always is for me), such as early on when he races up the stairs with the maid. He has a duel scene, not doesn't quite getting the concept of the glove's use in a challenge. His first response is to whip the bath towel that he's using to cover himself with to slap his challenger back, as we hear the lady of the house shriek. Later he slaps people indiscriminately when they annoy him, and then instead of pacing the other direction in the duel, walking behind his opponent. I also liked his scenes with the little dog, and how he created his own stethoscope out of plumber's tools.

It was also interesting to see him paired with Jimmy Durante. Durante's nose takes some abuse which tickled me, and while he has his share of groaners in the film, his energetic delivery, punctuated with a sidelong glance, open mouth, and "haaaaa!", is endearing. Some of his better quips:
"It'll be the greatest invention since Einstein discovered them relatives!"
"Say, he's no bargain - that guy has done more chiselin' than Rodin!"
"Don't I always stand at attention when they play The Mayonnaise?" (they're in France, so punning for Marseilles)

Lastly, Mona Maris, an actress from Argentina, really jumps off the screen in her supporting role. She's stunning, though the bit that has her throwing plates and whatnot out of anger in consecutive scenes got old pretty quickly. The other actors, Irene Purcell and Gilbert Roland, were less compelling. Having Roland be a cad who is seeing two women and telling each that he's married to the other, so that he can't possibly get married, and then Keaton being used in retaliation to make him jealous is an interesting idea, but it's poorly executed. Watchable for Keaton, Durante, or Mona Maris fans only.

Megan .
November 27, 2011
Bad. Just bad. Plot is ill-conceived. Some scenes were awkward and pointless. Jimmy Durante was just strange, as was the dialogue by him and between him and Buster Keaton. I give this film only one star, for the glove slapping throughout this film; it was the only redeeming quality in this film, in terms of comedy.
Page 1 of 1